Holy Week, also known as Passion Week, is an important Christian religious week, commemorating the Passion, Crucifixion, and Resurrection of Jesus. It is the last week on Lent and, also the week before Easter. Holding a great significance for the Christian community, the whole week is observed with different customs, traditions, and church services in both Western and Eastern Christianity. 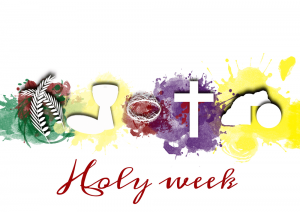 The whole week echoes the theme of Jesus’ last days in this world, right before his Crucifixion on the cross. The festivities of this week kick start with Palm Sunday and goes right through Holy Monday, Holy Tuesday, Spy Wednesday, Maundy Thursday, Holy Friday, and Black Saturday. The week comes to an end with Easter Sunday, after which it is followed by Eastertide and the Pascha Season.

The importance of this week lies in the fact that it honors some of the very precious moments of Jesus’ last days on Earth. With Palm Sunday, it tells us about Jesus’ Triumphal Entry into Jerusalem. The days of Holy Monday and Holy Tuesday makes us remember the events of fig tree cursing and the temple cleansing. The days of Holy Wednesday and Maundy Thursday commemorate Jesus prediction about his betrayal and death, and also reflect some of His most important teachings on love and unity. The days of Good Friday and Black Saturday mourn the Passion, Crucifixion, and Passing of Jesus. The last day, called the Easter Sunday, shares with us the joy of Jesus Resurrection from the dead.

What Happened on Each Day of Holy Week?

Holy Week, as the name suggests, is a period of seven days – with each of the day reflecting its own meaning and having its own significance. Starting from Palm Sunday and ending at Easter Day, Holy Week is all about remembering Jesus Christ’s teaching for his people, understanding His important parables, following His way of life, and commemorating His Passion, Death, and Resurrection.

Want to know what happened on each day of Holy Week? Let’s dive into the complete Holy Week day details, and learn the important stories that each day brings to the table.

In Western Christianity (Roman Catholic Church), Palm Sunday marks the beginning of Holy Week. It is the Sunday of Holy Week. The day commemorates Jesus triumphal entry into Jerusalem, riding on a donkey, where he received a grand welcome by the citizens who laid their shrouds and palm branches in respect of Jesus.

The Christian scriptures record the grand entry of Jesus in the country with the huge crowds yelling “Hosanna to the Son of David” to honor Him as their eagerly anticipated Messiah.

*Do you know? Prophet Zechariah had already predicted Jesus’ triumphal entry into Jerusalem, 500-years before the event actually happened (Zechariah 9:9).

Jesus cursed the fig tree while en route to Bethany with Jerusalem. The tree withered the next day on Holy Tuesday. He then visited the Temple in Jerusalem and cleansed it of all commercial activities that were going inside the temple. He turned over the desks of money exchangers, drove the livestock out of the temple, and urged people not to make His Father’s house a house of trade.

The day also mentions about the Pharisees and their increasing hatred for Jesus. On Holy Monday, they posed different questions to Jesus and asked Him of His authority.

*Do you know? The cursing and withering of the fig tree represented Israel’s spiritual condition. The tree symbolized judgment and reflected the spiritual death of Israel.

Holy Tuesday is the third day of Holy Week, and as the name suggests, the Tuesday of Holy Week. There are a couple of important things that happened on Holy Tuesday. This includes the withering of fig tree which was cursed by Jesus while en route to Bethany with his disciple a day earlier on Holy Monday.

The day also tells us about the heated temple debates that continued for several hours between Jesus and the religious leaders of that time, who kept on questioning Jesus of His Authority and asked if His authority has come directly from God or from himself.

Other very important events happened on the Tuesday of Holy Week included the Woes of the Pharisees by Jesus against Pharisees in which Jesus portrayed them as hypocrites and the Olivet Discourse in which Jesus prophecized the future events leading up to and including the Tribulation.

*Do you know? The explanation of different Parables by Jesus on Holy Tuesday angered the chief priests of that time, and they ultimately decided to kill Jesus as soon as possible.

*Do you know? Holy Week Wednesday is also called Spy Wednesday. This is because, on this day, Judas betrayed Jesus. Due to the sneakiness of Judas his actions, the image of a spy has been advocated.

Maundy Thursday, also called Holy Thursday, is the fifth day of Holy Week in Roman Catholic Churches. The day is the Thursday of Holy Week and holds special importance for Christians. The day is usually a public holiday in almost all of the countries with majority Christian population. The importance of the day lies in the fact that it commemorates the Passover Meal, known as Jesus Last Supper before his death on Good Friday.

While having the Last Supper, Jesus did several things which have raised the importance and significance of this day for the Catholics. Some of the major things mentioned in the Christian scriptures include – Jesus’ Prediction on his Betrayal by Judas, Prediction of Peter’s Denial, the Institution of the Eucharist, Washing of the disciples’ feet, the New Commandment, the Farewell Discourse, and Prediction about His own death on the following day.

*Do you know? On Maundy Thursday night, Jesus bent down to wash the feet of his disciples. When disciples insisted that they can’t get this happen (as it was disrespecting), Jesus replied them saying if He doesn’t wash their feet, they will no longer have part with me in Hereafter.

Good Friday is one of the important and mournful days of the Holy Week. It is the Friday of Holy Week, and the Friday before Easter Sunday. The day commemorates the capture of Jesus by the Roman soldiers, the nailing of Jesus on the cross, His Passion, His Crucifixion, and His Burial. The day is usually a public holiday in most of countries with heavy Christian population.

*Do you know? Jesus remained nailed to cross for straight six hours, from 9 am to 3 pm. Right after his last breath, there was an Earthquake in the town and the curtain of the temple tore into two.

Holy Saturday is the seventh day of Holy Week, the day after Good Friday, the last day before Easter Sunday, and the day of mourning. This day commemorates Jesus’ dead body lying in the tomb and the Harrowing of Hell.

*Do you know? Mary Magdalene used to visit Jesus’ tomb to show regard and bless His body with embalming oils.

Easter is a grand Christian day of celebration, that honors Jesus Christ’s resurrection from the dead. The day is the last Sunday of Holy Week, the end of lent, the last day of Triduum, and marks the beginning of Easter season.

Easter Sunday is the day when Jesus rose from the dead following his Crucifixion and Burial on Holy Friday. His resurrection marks the victory of good over evil and death. Since the Resurrection of Jesus on Easter Sunday speaks to the fulfillment of God’s promise to humanity, Christians honor this day as the most important day on their religious calendars.

*Do you know? On early Easter Sunday morning, when Mary Magdalene came to anoint Jesus body, she found the tomb empty and started crying. But soon an angel appeared and told her that Jesus is resurrected from the dead.

In countries, where Christians are in the majority, the whole of Holy Week is celebrated with great religious enthusiasm and Catholic spirit. The most important days of Holy Week – Maundy Thursday, Good Friday, and Easter Sunday – are public and bank holidays. In most of the country, these days are off for banks, offices, institutes, and government and private organizations. Even if there are any commercial activities, they are either visible for a half day or operate for a few hours only.

There are different signs, symbols, and colors, that are deeply connected to the Holy Week customs and traditions. These important symbols are a vital part of Holy Week. While some of them have been associated with Holy Week since the early Christians, there are some others as well which originated from pagan beliefs and traditions.

Palms – Starting from Palm Sunday, we have the symbol of Palms. When Jesus entered Jerusalem for his final week, the citizens of the town welcomed him with palm branches and leaves. In those times, the palm was a sign of victory and was only used to represent a great deal of respect to the kings.

Hosanna – Chanting Hosanna is a common tradition of Holy Week. Hosanna means “Save Now” and was chanted on Jesus triumphal entry into Jerusalem. In today times, Hosanna is used in hymns throughout the Holy Week church services.

Figs – Figs are traditionally eaten fruit on Holy Week. This because of a tradition that says that Jesus cursed a fig tree would not bear any fruit and that he ate figs after his entry into Jerusalem on Palm Sunday.

Bread and Wine – These are the things that Jesus used during Passover meal on Maundy Thursday, to represent his body and blood. Today, when Christians celebrate the Eucharist during Holy Week, they always eat bread and drink wine, because they believe that Jesus is present in this sacrament.

Oils and Chrism – On different days of Holy Week, Jesus got anointed with different oils and fragrances. Today, the blessed oils and the chrism are widely used by Christians on Holy Week.

Washing of the feet – Washing of the feet on Holy Thursday is a common Holy Week symbol imitated by the Pope, Bishops, Priests, and local Christian public. They do this in remembrance of Jesus when he gave his disciples an incredible lesson after Passover meal.

The Cross – The Cross is the main symbol of Holy Week, as it represents the Crucifixion of Jesus on the cross. Today, the cross is presented to Christians as a sign of thankfulness to Jesus as he died on the cross just for the forgiveness of his people.

Easter Eggs – In ancient times, an egg was considered as a symbol of new birth and life. Looking at the connection of eggs with life, Christians use Easter Eggs as a symbol of Christ’s Resurrection from dead on Easter Sunday.

Easter Bunny – After long winters, rabbit, as a rule, leave their underground homes during Holy Week season. So today many Christians relate the rabbit leaving its underground home a symbol of Jesus leaving the grave on Easter Sunday.

Colors – Red, Scarlet, Purple, White, and Gold are the main colors associated with Holy Week. Red is the traditional color of Holy Week and symbolizes blood. The white and gold symbolize the church’s rejoicing in Lord’s Supper sacrament and Easter resurrection from dead. Scarlet or purple symbolizes the sovereignty of Christ. On days of mourning such as Good Friday and Holy Saturday, the color black is used.