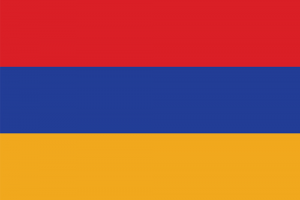 Armenia is located in the country of Western Asia located in Eurasia in the South Caucasus region. It shares its border with Turkey in the West, Republic of Artsakh and Azerbaijan in the East, Georgia n the North and Iran and Azerbaijan’s exclave of Nakhchivan in the South. It is a democratic nation of unitary and multipart. The National Anthem of Armenia is Mer Hayrenik (“Our Fatherland” in English). Some of the famous cities are Yerevan, Gyumri, Vanadzor, Vagharshapat, Abovyan, and Kapan.

Yerevan is the Capital and most populated city of Armenia. The estimated population of this city in 2016 was almost 1,073, 700.

Mr. Armen Sarkissian is current President f Armenia who was elected in the election held in March 2018 after getting the lead of 85.71% votes.

The national flag is consisting of three horizontal bars of Red, Blue and Apricot color. It is adopted in 1990 on August-24.

The national currency of Armenia is dram. The official code of the currency is AMD and the commonly used symbol is ֏.

The national religion of Armenia is Christian because 95.8% of the total population is Christian. While not religious, Yazidism, and others are 3.0%, 0.8%, and 2.3% respectively.

The international dialing code of Armenia is +374.

The only two airports in Armenia provide commercial airline service

Armenia is a country of historical and cultural heritage. Some of the best places to visit in Armenia are Yerevan, Sevanavank Monastery, Sevan Lake, Mount Aragats, Amberd Fortress, Karahunj Observatory, and Khor Virap.

According to an estimate, the total area of Armenia is almost 29,743 sq. kilometre

Public holidays in the Faroe Islands