The Balloon Ascension Day is celebrated on 9th of January each year. Have you ever traversed the air through a hot air balloon? If so, then you have experienced what it is like to celebrate the balloon ascension day. For sure, you have witnessed how thrilling it is to ride a hot air balloon and how enjoyable it is to see the beautiful view of the world from atop. It should have felt incredible to ride past the clouds in the sky and to be so near at flocks of birds flying through the sky. 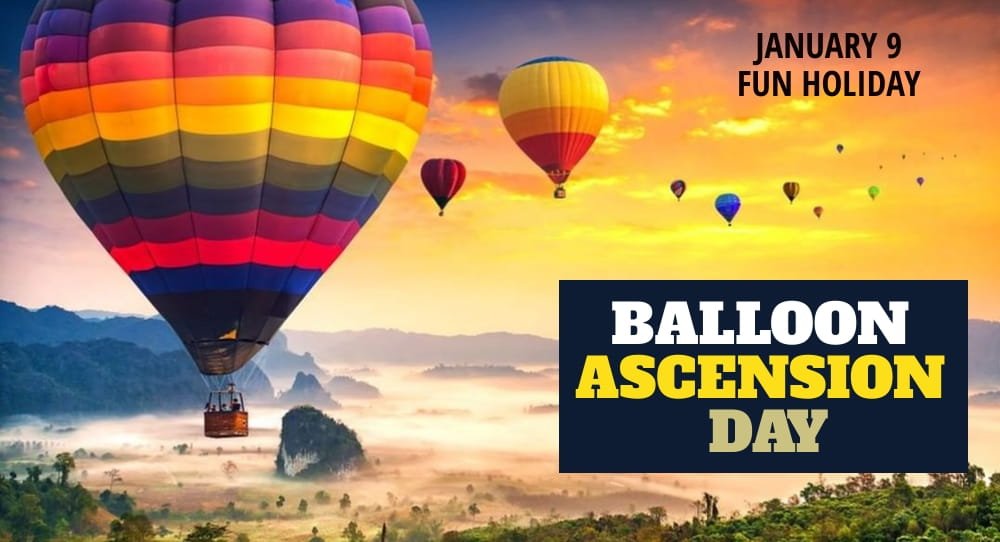 For centuries, flying through the sky was only in the imagination and dreams of people. However, this changed when hot air balloons were invented. More so, when airplanes and helicopters were made. Unfortunately, due to the existence of lots of high tech devices for flying, hot air balloons have been neglected by people. The Balloon Ascension Day is thus celebrated to have a special day of dedication to hot air balloon as well as to honor Jean Pierre Blanchard who was able to successfully fly through the air using a hot air balloon.

What is Balloon Ascension Day?

The Balloon Ascension Day is a special day of celebration held to commemorate hot air balloons as well as to remember Jean Pierre Blanchard, the man who is known for being the first one to fly a hot air balloon.

The celebration of the Balloon Ascension Day started with a man named Jean Paul Blanchard, a French aeronaut and innovator. He stood in front of the Walnut Street Prison in Philadelphia, Pennsylvania on January 9, 1793. This spot has been known as the independence Square. Before flying, he made some last-minute adjustments to his hot air balloon. A sizable crowd spectated him. These crowd of people had tickets to witness his flight. They were there too witness him ascend into the sky with his hydrogen-filled gas balloon. Blanchard prepared a lot beforehand. He was able to create a lot of buzz with regards to this activity of his that almost all the people in the city went to see the show. In fact, the president of the United States during that time, George Washington, was present to witness the event.

The fact is that some spectators tried to convince Blanchard to have them join him. However, Blanchard did not allow anyone to go with him. He then ascended into the sky, at about 200 fathoms during the course of the flight. During the entire time, he monitored his pulse. He then finally came down gently in a field witnessed by a confused farmer. This was the first evet balloon flight to have taken place. It was a success and soon, a lot of people flew hot air balloons.

This important event is commemorated each year during the 9th of January, the day when hot air balloon was first flown.

The following are the main reasons why you should participate in the celebration of the Balloon Ascension Day:

To Commemorate the Pioneer of Balloon Flight

You should also celebrate this day basically to enjoy. It is just so much fun to ride hot air balloons, so you should experience it yourself.

How to Celebrate Balloon Ascension Day?

The following are the best things to do to make your celebration of the Balloon Ascension Day as best as it can be:

Another good way of celebrating this day is to make a hot air balloon. You may be the type of person who likes to invent things or manipulate things just like an engineer. This is the time to explore your technical plus creative side in making a hot air balloon.

You can also celebrate this day by witnessing the flight of hot air balloons. There are a lot of places that conduct these activities during the holiday. You can visit these places and be amazed with the many kinds of hot air balloons being flown by people as well as their different designs.