The Independence Day of Brazil locally called Sete de Setembro is observed annually on September 7th, commemorating Brazil’s Declaration of Independence from Portugal in 1822. Prince Pedro proclaimed the independence of Brazil at the shore of Ipiranga River, liberating Brazil free from the Portuguese colonialism.

September 7 in Brazil marks the Brazilian Independence Day. It is one of the most important historical events in Brazil, marking the end of Portuguese rule and the achievement of political autonomy.

In the late 18th and early 19th centuries, Brazil increased pressure to free itself of the commercial monopoly imposed by Portugal. The country wanted economic freedom to be able to expand trade. This freedom would only come with independence.

A number of prior attempts at Independence had taken place with many people dying in the quest for this ideal. Finally, Prince Pedro the former King of Portugal who had fled to Brazil before falling out of his former country declared Independence on September 7th, 1822, marking the Independence of Brazil. In December of that year, Pedro was declared Emperor. Today Brazilians celebrate this historic date of September 7 as Brazil Independence Day. 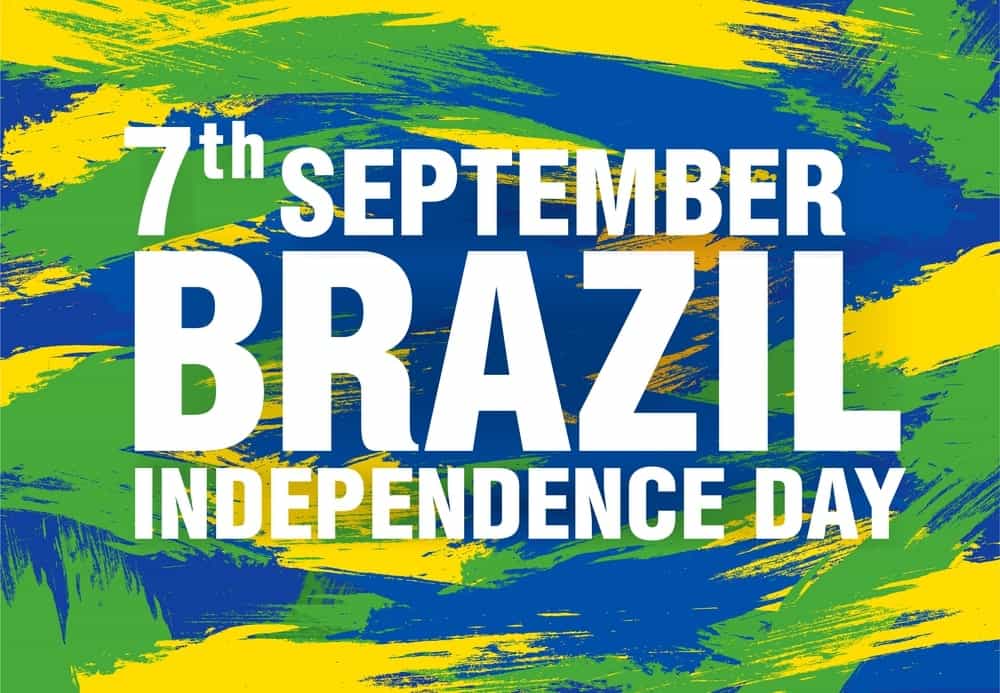 A brief and easy-to-understand history of Brazil’s independence. How did Brazil gain independence and what were the major events that broke the 300-year-old Brazil-Portugal connection? Here’s the Brazilian Independence Story, explained in simple words…

Portuguese explorers arrived in Brazil at the opening of the 16th century. At that time, the region was inhabited by hundreds of different types of tribes, who were not that much concerned about defending their lands from foreign invasion.

Pedro Alvares Cabral was the first Portuguese to colonize what is now Brazil on the continent of South America, in 1500 under the sponsorship of the Kingdom of Portugal. Since Pedro Cabral was Portuguese – Portugal claimed Brazil as theirs.

After colonizing Brazil, the Portuguese paid very little attention to Brazil. They shifted their main attention towards enhancing trade with India, China, and the East Indies mainly due to the high profits gained in this business.

Till 1530, very few Portuguese expeditions came to Brazil and that too only for the purposes to obtain brazilwood which was at that time only found in that region. They employed the natives to extract brazilwood from the tropical rainforests of Brazil and then sold it to Europe, where it was used to produce a valuable dye to give color to textiles.

Portugal’s lack of interest in Brazil, gave an opportunity to pirates and people of several other countries to poach profitable brazilwood from Portuguese-controlled Brazil. This kept going on for many years until the Portuguese realized that some strong European countries, especially France, were also sending their secret missionaries to extract brazilwood and making plans to capture the productive areas of Brazil.

Worried about the foreign invasion and attracted towards the Brazil land rich in mineral resources, the Portuguese sent thousands of their people to take possession of the land and combat any foreign invasions.

Starting in the 16th century, sugarcane plantation became the base of the Brazilian economy. A large number of slaves were used on large plantations to make sugar for export to Europe during the first 150 years of the colonial period.

In time, gold and diamonds were extracted from the Brazilian lands and Portugal was so happy because these valuable discoveries meant so much money for them. Because of these discoveries, a huge amount of immigrants came to Brazil in the 18th century and the economy became stronger and stronger. The mining of gold and diamonds, butter, coffee, sugar plantations, and the brazilwood – all led to Brazil’s economy boost up to the highest levels!

Meanwhile, attracted by the vast natural resources other European powers tried to establish colonies in several parts of the Brazilian territory. But the ‘already-alert’ Portuguese forces didn’t let any foreign invasion on the precious lands of Brazil.

Afraid from the 1807 Napoleon Bonaparte’s Invasion of Portugal, the Portuguese government and royal family including King John VI fled to Brazil, establishing themselves in the city of Rio de Janeiro. The royal family lived here for the next 13 years, ruling the whole of their Empire, perfectly safe and sound.

Following the defeat of Napoleon’s French forces in 1815, Portugal experienced a long period of political disturbances. To put an end to this unrest, the royal family had to go back to Portugal. In 1821, King John returned to Portugal, leaving behind his son, Prince Dom Pedro, to rule Brazil as his regent.

A year later, Prince Pedro wanted to separate Brazil from Portugal and led the independence war assuming himself as the emperor of Brazil. He shifted his loyalties towards Brazil and drew further and further away from his motherland (Portugal) and his father King John VI.

On Jan 9th, 1822, the Prince was called back to Portugal by the royal family, but he denied – an important date which became known as “Dia Do Fico” (I’ll Stay Day).

“As it is for the good of all and Brazil’s general happiness, I am ready: Tell the people that I will stay,” said Pedro.

Brazil Gains Independence under the leadership of Prince Pedro I

On September 7, 1822, Prince Pedro proclaimed the Independence of Brazil. Standing at the shore of Ipiranga River, Prince Pedro tore the Portuguese symbol from his uniform and said the historic words:

“Hail to the independence, freedom and the separation of Brazil. For my blood, my honor, my God, I swear to give Brazil freedom. Independence or death!”

The locals celebrated the stance taken by Prince Pedro and cheered in ultimate joy. The official breaking of ties between Portugal and Brazil happened on 22 September 1822, when Pedro cleared Brazil from all the Portuguese forces and wrote a letter to his father. On 12 October, Prince Pedro assumed the charge as the Brazilian emperor, the founding father and first ruler of independent Brazil.

Brazilians celebrate their independence day on September 7 with great patriotic zeal and fervor. There are high-energy celebrations throughout the country, with hundreds of thousands of people heading to the streets and public squares with their kids and families and witnessing parades, and cultural dances and music shows.

The grandest of the celebrations take place in Brasilia (the federal capital of Brazil) with the honorable President, high profile government officials, foreign delegations, heads of the military departments, and up to 30000 locals – all gathered together at the Ministries Esplanade to witness the grand military parade, cultural dances, flag-raising ceremony, and patriotic bands.

The streets are beautifully decorated with Brazilian national flags, and pennants perched from every house and shop. People wearing green and yellow outfits and carrying flags with them – head out to the streets with their kids and families and express their patriotism for their country. Other celebratory traditions include fireworks, concerts, patriotic displays, cultural exhibitions, independence-special festivals, and family-friendly entertainment activities in every city.