Casimir Pulaski Day is a legal holiday held in Illinois, USA, every first Monday of March each year. This event commemorates the birthday of Casimir Pulaski, a Polish soldier who made significant contributions to the independence of the USA. 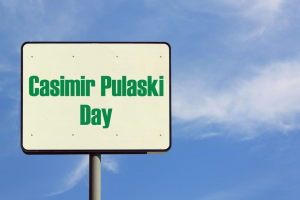 About the Casimir Pulaski Day

People celebrate the Casimir Pulaski Day by conducting various activities that will enable them to achieve the objectives of the event. There are street parades, group gatherings, and public ceremonies Some people also engage in historical ceremonies in order to remember Pulaski’s role in the American Revolutionary War in the late 18th century.

Casimir Pulaski was born in Warka, Poland, on March 4, 1747. His father was one of the founding members of the Confederation of Bar, which began in 1768 and took up arms against Russia, which controlled Poland at the time. After his father’s death, Casimir Pulaski took over military command and his brilliance earned him an impressive reputation. However, it was not long before he was accused of being involved in a plot to kill the king. As a result, he was forced into exile.

Pulaski traveled to Paris and met Benjamin Franklin, who enlisted him to help in the American Revolution in North America. He soon joined George Washington’s army. His first military engagement against the British troops was at the Battle of Brandywine on September 11, 1777. After a charge at Brandywine that allowed the American army to escape from the British, he was rewarded with a commission as brigadier general and the command of all American cavalry.

In 1779 Pulaski and his troops broke the British siege of Charleston, South Carolina. He was then sent to Savannah in a joint campaign with French allies. Seeing the French attack failing, Pulaski went into battle to rally the soldiers and was hit by a shot from a cannon. He died two days later (October 11, 1779) and was buried at the sea. Casimir Pulaski then became known as the “Father of American Cavalry”.

In 2009, the United States Congress passed a joint resolution conferring honorary US citizenship on Pulaski. They sent it to the president for approval. President Barack Obama signed the bill on November 6, 2009.

As mentioned earlier, Casimir Pulaski Day is celebrated every first Monday of March each year.

Casimir Pulaski has been one of the most well-known figures during the American Civil War. His contributions were pivotal to the USA’s independence attainment. Because of this, he deserves to be honored during this special day established to honor and commemorate him. And this is the major reason why you should participate in the celebration of this day.

The following are the best things to do to make your celebration of the Casimir Pulaski Day as best as it can be:

One good idea for your celebration of this day is to know more about Casimir Pulaski. You can read books about him. You may also watch all available documentaries and films that feature him.

You can also celebrate this day by joining hosted public ceremonies, parades, fairs, and group gatherings. This is a good way to collectively celebrate the event about the life and heroism of Casimir Pulaski.