Curaçao is a Lesser Antilles island located in the South Caribbean Sea in the Dutch Caribbean region. Being a part of ABC island it has a short distance from Venezuelan. The capital of Curaçao is Willemstad. With the total area of about 444 sq. Kilometers it has population consists of 160,000 individuals. This region in the world bear constant temperature the recorded coolest temperature in January is 25oC while the hottest temperature in September is 31oC.

January 01, is celebrated as the New Year’s Day in Curacao just like the rest of the world. It is declared as a public holiday in the country and all private and public sectors remain closed, learn more…

February 15, 2022, is celebrated as Carnival Monday in Curacao. It is purely a Christian event which began to represent the Christian practice of “Carne Levale”, learn more…

Friday, April 02, 2022, will be celebrated as Good Friday in Curacao. This day is celebrated on the Friday before Easter Sunday. It is a public holiday and all sectors remain closed, learn more…

In 2022, Monday, April 05 will be celebrated as Easter Monday in Curacao. This day is held right after the Easter Sunday, learn more…

April 27, 2022 is celebrated as King’s Birthday in Curacao. This day is also known as King’s Day and celebrated in Curacao and Netherland on the occasion of the birthday of King Willem, learn more…

May 01, is celebrated as Labour day each year in Curacao just like the rest of the world. It is also called the international day of workers and celebrated as a tribute to services of the workers throughout the year, learn more…

May 13, 2022, is celebrated as Ascension Day in Curacao. It is celebrated on the 40th day of Easter. It purely a Christian event which according to the Christian Bible commemorates the ascension of Jesus Christ, learn more…

July 02, in 2022, will be celebrated as National Anthem and Flag Day in Curacao. This day reminds the adoption of national flag and anthem of Curacao, learns more…

October 10, is celebrated as Curacao Day. It is public holidays for the general population, learn more…

December 25th each year is celebrated as Christmas Day in Curacao just like rest of the world. This day is celebrated with joy and festivity by the Christian community all over the world, learn more…

The day after Christmas in Curacao (Boxing Day)

The Day after Christmas in Curacao is held on December 26th. Which is also known as Boxing Day. This day is especially celebrated for servants when masters give them a gift for the appreciation for their services throughout the year, learn more…

Last day of the Year 31st December is celebrated as New Year’s Eve in Curacao and the world as well. It held on the night before the new year, learn more…

Fact and Figures about Curacao

All the facts and figures about Curacao are enlisted below, take a look if you want to know anything about them.

The national capital of Curacao is Willemstad. The estimated population of the city is about 150,000. This city is also known as the political and cultural center of the country.

Mr. Eugene Rhuggenaath is serving as the current Prime Minister of Curacao. He was elected in the election held in 2017 by getting most votes and assumed office in 2017, on May-29.

Lucille George-Wout is serving as the current Governor of Curacao. She took office in 2013, on November-04. Under the constitution, the governor serves as the head of the government and accountable to the Kingdom of the Netherland.

In 2017, the estimated population of Curacao was over 161, 014. It is ranked on 192nd position in the world’s most populated countries.

The current flag of Curacao is consisting of blue color with a yellow horizontal strip located just beneath the middle and two five-pointed stars in the top left corner. 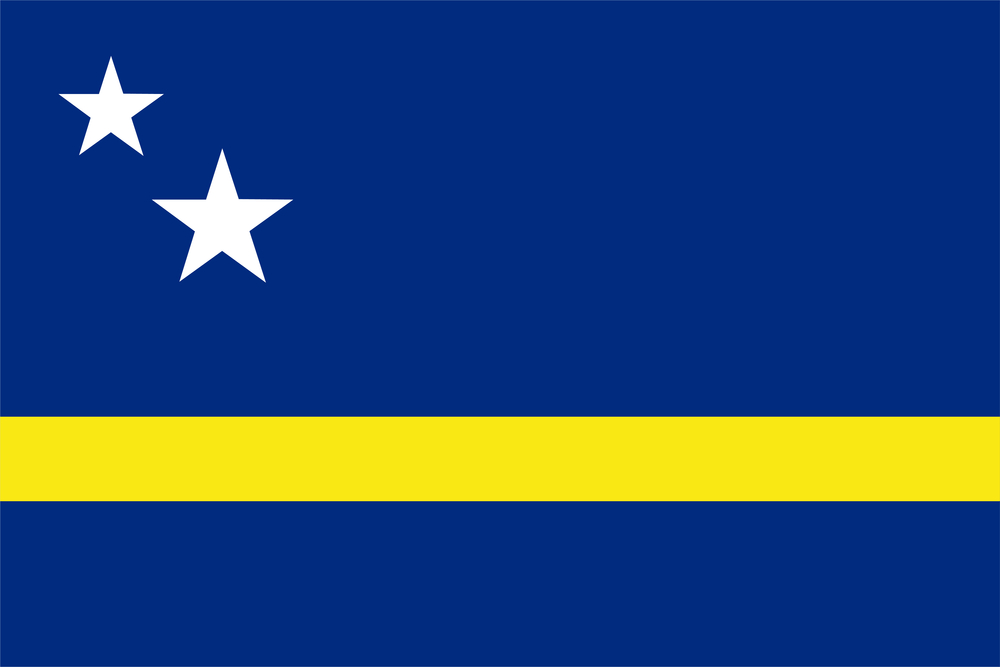 The national currency of Curacao is Netherlands Antillean guilder. The official code for the currency is ANG and most commonly used symbols are NAƒ, NAf, ƒ, or f.

The majority of the population is adhering to Christianity in which Roman Catholics are in majority while Protestants are in minority.

The international dialing code of Curacao is +559.

The total area of Curacao is about 444 sq. kilometers.

The estimated GDP of Curacao in 2008 was about 3 billion US dollars and the average growth rating was 3.5%.

The most commonly played sports in Curacao are Football, Baseball, Sailing, Boxing, and Track & Field.