The Dyngus Day is celebrated in Poland and in Polish American communities every Monday after Easter Sunday. It is also known as lany poniedziałek. This day celebrated Polish culture. It also aims to make people blow off a bit of steam after all the restrictions imposed during the Lenten season. The Dyngus Day can be traced back to a holiday called Smigus-Dyngus which is celebrated in Ukraine and Poland.

About the Dyngus Day

During this special day of celebration, people conduct various activities that let them achieve the purposes or objectives of this day. For one, people play with water to commemorate its spirit. People also eat various kinds of delicious Polish food. They also shout out on social media how they are celebrating this event.

According to historical accounts, the origin of the Dyngus Day can be traced back to the 10th century when Mieszko I of Poland conducted mass baptisms all over the country. The aim was to convert the dominantly pagan people into Christians. But before this happened, Dyngus and Smigus are two separate religious festivals that honor trwo different pagan gods. Dyngus was a God that represented water while Smigus was a God that represented thunder. 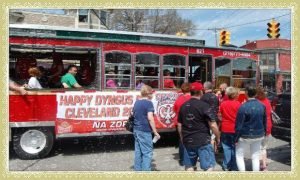 Polish immigrants brought the tradition into the USA as far back as the 19th century. Nowadays, the holiday is celebrated in various cities across the U.S, particularly ones that have large Polish populations such as Chicago, Illinois; South Bend, Indiana; Pittsburgh, Pennsylvania; Bristol, Connecticut; Elizabeth, New Jersey; Cleveland, Ohio and Buffalo, New York.

As mentioned earlier, the Dyngus Day is always held on the Monday after the Easter Sunday. This means that the dates of celebration for this event are as follows:

Perhaps the main reason why you should celebrate this day is for you to have lots of fun. The activities held during this event are so enjoyable to do. This may also be your chance to indulge yourself in delicious Polish foods.

The following are the best things to do to make your celebration of the Dyngus Day as best as it can be:

One traditional thing that people do during this day is trick or treating. Children go from one house to another asking for candies while securing their Easter Eggs.

The Spirit of Water

Also a common activity during the Dyngus Day is the dousing of water. People, especially children throw buckets of water at each other. They also use wet towels and squirt guns to splash other people with water.

Of course, the feasting on foods will not be gone in a celebration as fun as this. During this day, people eat mostly Polish food including Placki ziemniaczane (potato pancakes), Rosol (chicken noodle soup), Barszcz (Polish red borscht), Polish Hot Dogs, Paczki (custard filled donuts) and pierogi (dumplings filled with potatoes, cheese, meat or fruit).