National Epilepsy Day is celebrated in India every 17th of November each year. This day promotes awareness of epilepsy. It aims to join all the people together in order to highlight the problems faced by people who are suffering from epilepsy. The day also sheds light on the plight of the relatives, family, and caregivers of people with epilepsy. The Day is a joint initiative by the International Bureau for Epilepsy (IBE) and the International League Against Epilepsy (ILAE).

About the National Epilepsy Day 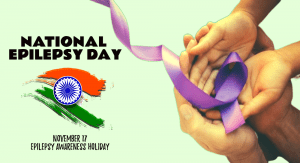 Even though epilepsy is one of the oldest known medical conditions, there is still a lot of misunderstanding and public fear about epilepsy. Because of this stigma, many people are still reluctant to talk about epilepsy. And this reluctance eventually leads to people with epilepsy living their lives in shadows, them being discriminated in their communities and workplaces, and lack of funding for researches that can lead to breakthroughs in the treatment of the disease. For people suffering from epilepsy, the discrimination against them is much more painful than the disease itself.

Hence, the purpose of the National Epilepsy Day is to raise awareness about the disease as well as to educate the general public so that they can be well informed about the facts of epilepsy. The day also advocates for better treatment and care for epilepsy patients as well as for more investment in researches about the disorder.

What is the International League Against Epilepsy?

The International League Against Epilepsy (ILAE) was founded in 1909. It is the world’s first association of health professionals and physicians whose work focuses on epilepsy. Their mission is to provide greatest quality of care to people afflicted with the disease. They also cover other diseases with seizure symptoms.

The prime mission of the ILAE is to make sure that health professionals, epilepsy caregivers, epilepsy patients, the governments, and the general public have quality knowledge about epilepsy. They also aim for the correct diagnosis and appropriate treatment of epilepsy.

The goals of the ILAE are to:

What is the International Bureau for Epilepsy?

The International Bureau for Epilepsy was founded in 1961. This bureau focuses on the social aspects of epilepsy. They serve to be the voice of epilepsy patients, their families, and the people who take care of them. They envision themselves to make a world where no one is ignorant about epilepsy.

Their strategic priorities are to ensure that:

The IBE collaborates with various governments and professionals worldwide. They work closely with the World Health Organization (WHO). They also have special consultative status on the Economic and Social Committee (ECOSOC) of the United Nations (UN).

What is the origin of the National Epilepsy Day?

In 2015, the two organizations described above, the ILAE and the IBE founded the National Epilepsy Day. Apart from achieving their respective missions and visions, they also want to designate a special day where people can learn more about epilepsy and how to properly treat those who are afflicted with it.

This holiday is always celebrated every November 17 each year. This means that the upcoming National Epilepsy Day will be held on Wednesday, November 17, 2021.

The following are the main reasons why you should participate in the celebration of National Epilepsy Day.

One good reason why you should celebrate this day is that this can be a venue for you to motivate epilepsy patients. As mentioned earlier, various circumstances like discrimination and bullying may have demotivated epileptics. But this is the best time to let them know that they have protectors and one of them is you.

To Stop Discrimination Against Epileptics

Another good reason to celebrate this day is that you can spend it in such a way as to advocate against the discrimination of epileptics. You can voice out your opinion about how other people may have hurt people with epilepsy. You can also educate them about the disease for bullies to understand that what they are doing to epileptics is not good at all.

To Be Proud of Yourself as an Epileptic

Or perhaps you are an epileptic person yourself. Sure, you suffer from episode of seizures and in those times, you may feel like you have lost the world. But stand up even if you have it. People around you support you in life. You have so many years ahead of you with life expectancy the same as ordinary people.

The following are the best things to do to make your celebration of the National Epilepsy Day as best as it can be:

Another good way of celebrating this day is by creating or contributing to a fundraiser dedicated to helping epileptic people. It doesn’t matter how much you give, as long as you do, you are doing a good deed. Proceeds will definitely help epileptics especially in getting their treatments and medicines.