The Fukugawa Festival has held annually every 15th of August. It is one of the big three festivals in Japan along with Kanda Matsuri and Sanno Matsuri. The Fukugawa festival is very famous for the largest golden portable shrine of Japan. The shrine bearers shout the words “Wasshoi, washhoi!” as they douse each other with water for purification purposes. Even the bystanders and watchers of the festival throw water amongst themselves. Hence, another name given to this festival is the water throwing festival. 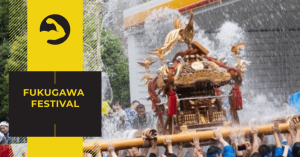 What is the Fukugawa Festival?

The Fukugawa festival usually happens 3 days before and after August 15. However, the exact schedule may differ from one year to another. There are festivities held including parades which start from 7:30 am. This festival is centered around the Fukugawa shrine, more formally known as the Tomioka Hachiman shrine. The closest stations to this place are the Monzennakacho of the Oedo and Tozai line and the Kiba station of the Tozai line.

What is the history of the Fukugawa Festival?

The Fukugawa Festival has quite a rich history. It has evolved so much from when it was started back in the Edo Period even up until this day.

What is the origin of the Fukugawa Festival?

The origin of the Fukugawa Festival can be traced back to the Edo period when it was first celebrated to honor the god Hachiman, the divine guardian of Japan, at around 1641. It was also a celebration of the birth of Ietsuna Tokugawa who later became the fourth shogun of Tokugawaa Shogunate. The festival was held in the Tomioka Hachiman-gu which is a Shinto shrine dedicated to Hachiman. This is actually the largest shrine dedicated to kami in Tokyo. The festival name Fukugawa was derived from the Koto area where such festival was held.

When and Where is Fukugawa Festival held?

How Did the Fukugawa Festival Evolve?

Fukugawa festival is indeed one of the three greatest festivals in Japan. But in reality, every three years, the festival transforms into something bigger. There is no limit as to how this festival becomes even more grandeur than the past ones. The upcoming super-sized Fukugawa festivals will be held next year, 2020, and another one on 2023.

Nowadays, people call Fukugawa festival as Mizukake Matsuri, which in English means Water-Splashing Festival. During this event, over 120 mikoshi which are small kami-toting palanquins are paraded across the streets by devotees and shrine goers. They are accompanied by musicians and dancers.

When is the Fukugawa Festival?

The Fukugawa Festival is held every August each year in Japan. However, exact dates are not yet known until the authorities announce them. But for this year, it will be held on late August 2020. It will also be held in the same month next year 2020.

Why celebrate the Fukugawa Festival?

One of the main reasons why you should celebrate the Fukugawa festival is that it is an event that has been embedded in the culture and traditions of the Japanese people. This is one of the most fun and enjoyable celebrations they do each year and hence, they look forward to it. Japanese people are very welcoming when it comes to other people joining this celebration of theirs.

How to Celebrate the Fukugawa Festival?

There are various activities done to celebrate the Fukugawa Festival. Some of the most important and interesting ones are the following:

The grand procession of the divine palanquins is actually the highlight of this festival. They call this the Mikoshi Rengo Togyo. In this procession, about 53 large scale Mikoshi shrines or portable shrines are paraded across an 8km path. While doing this, the people carrying the mikoshi chant the term “Wasshoi!”. Many people enjoy the sight of these 53 mikoshis. The estimated duration of this parade is about 2 hours from start to finish.

Participate in the Water Throwing Activity

Another enjoyable activity during this day, and one that will always be there, is the water throwing activity. Here, about 54 mikoshi teams along with musicians and dancers parade across the streets of Koto-ku. About 30,000 people participate in this parade each year while a crowd of about 500,000 people cheer on them. The crowd also throws water to the people participating in the parade. They consider this a good way to soak during their summer season.

Soaking in water has a special purpose in this festival. It is not easy for the people participating in the parade to carry the heavy weighted mikoshi. And they do this exactly during the summer when the festival is being held. And so people throw water at them thinking that it would refresh them. Apart from this, some people also believe that the Gods in the mikoshi enjoy getting soaked in water during the summer.

The Fukugawa festival is really a festival full of fun-filled activities just like those mentioned before. But for those people living outside of Japan who only wanted to visit this country during the event, then it is also a good opportunity for them to enjoy traveling around the country. There are so many beautiful places to visit. And also, there are so many other activities to do. This is the perfect time to experience them.