When is Guru Hargobind Singh Jayanti ?

In, the birthday falls on Monday, July 5th. 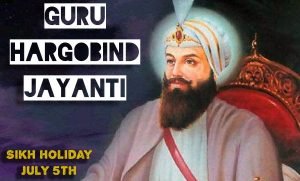 Who is Guru Hargobind?

Guru Hargobind Ji is honored as the 6th Nanak in the Sikh religion. It is said that he become Nanak after the Jahangir executed his father, Guru Arjan. He is one of the Nanak who introduced the process of militarization to the Sikh community. This was actually an act that could turn out as a protection for the Sikh community after the death of his father. He also wore two swords the Miri and Piri. This sword symbolizes the concept of temporal power and spiritual authority. He is one of the Gurus who constructed near the Harminder Sahib in Amritsar. The throne was named as Akal Takht, meaning the throne of the timeless.

This Takht is represented of the fact that it is the highest throne of the earthly power of the Khalsa( the collective Sikh community).

He was throned for the longest time, which is 37 years, 9 months, and 3 days.

Why is Guru Hargobind famous?

Diwali is celebrated by the Sikhs, Hindus, and Jains with equal enthusiasm. For Sikhs, all around it has more important significance. For them, it is the day when the sixth Nanak was released from the prison along with 52 other princes in the year 1619.

The Emperor Jahangir was the one who had imprisoned Guru Hargobind Ji and other 52 princes. Requests for the release of Guru Hargobind Ji release was made, and he agreed with it easily. However, Guru Ji also made a plea that the other 52 princes were released with him. To which the emperor agreed as well but with the condition that whoever can hold the end of the cloak of the Guru will be released. This was a condition made by the Emperor so he could minimize the number of the release of the princes. But very cleverly the Guru made the cloak with 52 strings attached to it which made it possible to release the 52 princes as they can now hold the 52 strings easily.

The Sikhs celebrate the release of the Guru as they Light the Golden Temple and this legacy continues till this day. As the event of Diwali is the festival of lightning.

Different Sikhs perform different rituals on this very day. The celebrations start very early in the morning. Different Sikhs sing various Hymns on this particular day. In the morning the Gurduwaras observe the celebration on this day by the processions which are followed by the singing of the Hymns — Kathas and Kirtan in respect and praise of the Gurus. The volunteers working in the Gurdawaras arrange a community lunch (the Langar) inside the Gurduwaras. This lunch evokes the spirit of the event even more irrespective of the caste, creed, and colour. This is because food should be served with the seva and bhakti.

At night of the Gurupurab, the Gurduwaras also arrange sessions at night time. At night Rehas are recited, and the Kirtan then follows this until the night ends. All the Sikhs celebrate Gurupurabs all around the worlds. The celebrations are colourful in many areas as the Sikhs celebrate it with great zeal.

The Sikhs believe that the celebration of the 10 Guru Nanak is necessary as they were responsible for teaching and shaping the beliefs of the Sikhs and many Sindhi Hindus. Guru Nanak Gurpurab is the name given to the occasion of the birthdays if the 10 Nanaks. The Sikhs celebrate these Gurupurabs with all the religious rituals.