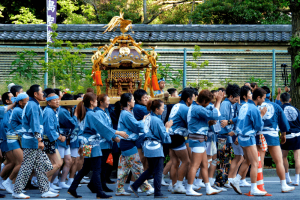 It alternated with the Sanno Festival or Sanno Matsuri which happens every even-numbered years. For the Kanda Festival, various activities are held for an entire week. It culminates in the main activity held during the weekend closest to May 15. Some of the highlights of the festival include a procession through central Tokyo on Saturday and then parades of mikoshi or portable shrines on Sunday.

What is the Kanda Matsuri?

The Kanda Festival is held at the Kanda Moyjin shrine which is located in Chiyoda ward in Tokyo. It is also one of the three greatest festivals in all of Japan along with Osaka’s Tenjin Matsuri and Kyoto’s Gion Matsuri.

What are the two types of Kanda Matsuri festival?

What is the History of Kanda Festival?

The Kanda Matsuri has a rich history. Its roots can be traced back to the Edo period during the rule of Ieyasu Tokugawa.

What is the origin of the Kanda Festival?

According to experts, the celebration of this festival started back in the Edo Period (1603-1867). The festival was celebrated in honor of the prosperity under the new regime taken by the Tokugawa shogun who rules the country of Edo, which is the present-day Tokyo. The Kanda Festival is only one of the two festivals allowed to pass the Edo Castle grounds during that time. The other one is the Sanno Matsuri. Both of these festivals were held annually. However, due to intense competition between the two festivities, people decided to celebrate these two festivals in alternating years.

What is the Kanda Myoji Shrine?

How did the Kanda festival evolve?

The Kanda Festival is also called the Tenka festival or the unification festival. The name was derived from Ieyasu Tokugawa who was the founder of the Edo shogunate. Before he battled other warlords, he commanded his servants to pray for this win at the Kanda Myojin shrine.

After the war, Ieyasu Tokugawa was able to unify Japan. And to show appreciation to the Kanda Myojin shrine, he ordered the building of many shrines around it. Since then, the Kanda festival was held to honor the Kanda shrine.

When is Kanda Festival?

Where is the Kanda Festival held?

When the Kanda festival is celebrated, it is held at the Kanda Shrine and all the surrounding districts of Central Tokyo. Its parades include over 200 mikoshi or portable shrines plus the floats, musicians, and dancers who perform for the event.

Why Celebrate the Kanda Festival?

One of the main reasons why you should celebrate the Kanda festival is because it is just full of fun and enjoyment. Of course, Japanese people participate in this celebration, and hence if you are one, it is already a given thing for you to celebrate the event. If you’re not Japanese, the Japanese people will be welcoming you in the best way to join them in this event of theirs. You can have all the fun that you want. In addition to that, the Kanda festival has been a preserved celebration in Japan. It has been celebrated for so long already and it will always remain to be one of the greatest festivals in the country.

How to Celebrate Kanda Festival?

Since the Kanda festival is one of the most important celebrations in Japan, there are many activities held to celebrate the event to its full potential. The most important ones are the following:

The main procession for the festival is held on Saturday. But during the evening before that, various preparations are held.

Preparations for the Saturday Kanda Festival

On the evening before the main procession on Saturday, various Shinto rituals are performed by people in order to invite spirits of the three deities in the shrine. These rituals are done using portable shrines called mikoshi.

The mikoshi or portable shrines are paraded across the streets of Otemachi, Akihabara, Nohonbashi, and Kanda. People including musicians and priests on horses who are dressed in traditional colorful costumes accompany the mikoshi.

The procession during Saturday leaves the Kanda Myojin shrine at about 8:00 in the morning. A brief stop is made at 10:30 at the Tokyo Imperial Palace where the former grounds of the shrine are located. After this, the procession continues across the Otemachi and Kanda streets until lunch break at about 13:30. After that, the procession proceeds to the Nihonbashi bridge and the Nihonbashi Mitsukoshi department store at about 16:30. It then continues to the Chuo-dori street and then the Akihabara district. The parade returns to the shrine at 19:00.

Aside from the main procession just discussed, another one is actually held which starts later in the afternoon at 15:00. It starts from the Arima Elementary School and then proceeds to the Kanda Myojin Shrine for 3 hours. This procession is participated by men on horses dressed in samurai uniforms and festival floats depicting characters from popular Japanese legends, folk lore, stories, and contemporary pop culture. There are also dancers and musicians in this parade.

The next day on Sunday, the celebration is continued by various neighborhoods in the Nihonbashi and Kanda districts. They showcase mikoshi parades. Every neighborhood has its own local guardian deity called origami who is believed to look after the community and all the families living there. These ujigamis are housed in mikoshis and paraded across the streets to bells the residents. This parade is full of life and fun. People participate in wearing vibrant colors. The festival music is infections. And the atmosphere is just joyous.

Ceremonies for the Kanda Festival

Various ceremonies are also held during the Kanda Festival. One is the Houren Mikoshi Senzasai wherein the God of Kanda Myojin is transferred to the mikoshi. Another one is the Reitaisai wherein the Mikomai dance is performed by the Miko priestess as an offer to the Gods.