Ker Puja is an event that is observed in the Tripura that is in India. The celebration of this very event starts two weeks after the Kharchi Puja. Kharchi Puja is to honor Ker, which is deity that acts as a guardian for Vastu Devta. This includes the offerings and sacrifices along with a boundary; this makes sure that it safeguards the people from the calamities and also save them from the dangers of external aggression. The Tripura Rajas started this Puja. A public holiday is also observed on this day. Banks and all the government offices are closed on this day.

When is Kera Puja of Tripura Festival in 2021?

Kera Puja Festival falls after the fortnight of Kharchi Puja. In 2021, the festival is going to be celebrated on Friday, July 2nd. 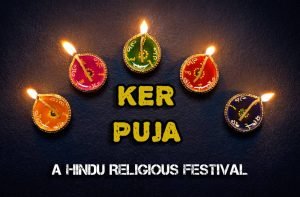 During this Ker Puja, the people of the area of Tripura are not allowed to enter Agartala. The capital of Tripula, the Agartala’s entrance, is closed. This is done, so the area is protected. Also is practiced as a custom that people should not light fires, dance, sign, or wear shoes. If anyone by any chance break these rules, the Puja starts again.

To make sure that nothing happens to the protected area expecting mother, elderly, sick and weak people are moved to the villages nearby. A loud sound can be heard on the day of the Puja that indicates that the festivities of the ceremony had begun. During this whole time, people are expected to remain calm and do not shout and cry.

Rituals of the Ker Puja Festival

Ker is deity, which can be considered as a devastation deity. At the start of the Puja, the preparations involved in the placing of the bamboo in a certain way that it produces sounds. The Chantias, the high priest, is the one who treated like a king on this occasion. This puja is high of great importance among the people due to their association with different aspects and beliefs.

The meaning of the word Ker is that of limit and separate area. The leaders of the past, this is expected and believed by the people that they also make this Pledge for the general good of the people and the welfare of the state.

Early in the morning is the actual time when the Puja starts. It begins at 8:00 to 10:00 am. People are forbidden to laugh or even speak when the puja begins. The puja is conducted as it is considered to protect the illness, poverty, and any other interests of the people and also to save them from external violence. Sacrifices and obligations are made in the Ker Puja. Devotees dance and rejoice after the puja.

The state of the Tripura was merged at the end of 517-year rule by 184 kings on October 15, 1949. This merger was done under the Indian Union, and then maharani named Kanchan Prabha Devi signed it.

This agreement clearly stated that the government of Tripura should continue sponsorship of temples, pujas, and all the festivals that were earlier organized by the Royal families until this day.

Tripura region is the only state of India where the government funds for the religious festivals. These festivals are both that are conducted by both the tribal and the non-tribal people. This tradition has been going on from the time of the merger of the state of Tripura.

Ker Puja is also one of the festivals that is funded by the government of India. The Puja is organized by the end of the year or at the time of harvesting season.

Some Facts about the Ker Puja Festival