Emmanuel Dapidran Pacquiao, born on December 17, 1978, more popularly known as Manny Pacquiao, is a Filipino professional boxer and politician. Boxing historians regard him as one of the greatest professional boxers of all time. Apart from boxing, Pacquiao has also ventured into acting, singing, and politics. 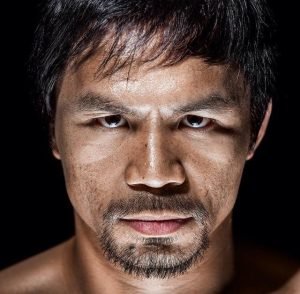 Manny Pacquiao was born on December 17, 1978 in Kibawe, Bukidnon, Philippines. His mother is Dionesia Dapidran-Pacquiao while his father is Rosalio Pacquiao. When he was in sixth grade of elementary school, his parents got divorced. He completed his elementary education at Saavedra Saway elementary school in General Santos City. However, he dropped out of high school due to poverty. He left home at the age of 14.

Apart from boxing, Manny Pacquiao also has several other ventures:

On February 12, 2007, Pacquiao announced that he would run for a seat in the Philippine House of Representatives in the May 2007 election. He ran for the representative of the 1st District of South Cotabato but lost to Darlene Antonio-Custodia.

On November 21, 2009, Pacquiao again officially announced that he would run for a congressional seat in Sarangani province, the hometown of his wife, Jinkee Pacquiao. On May 13, 2010, Manny was proclaimed the congressman of Sarangani. He won by a landslide vote.

In 2013, he ran for the same post, unopposed, ultimate becoming Sarangani’s congressman once again.

During the 2016 elections, Manny ran a post for the Senate of the Philippines. On May 19, 2016, he was official proclaimed one of the winners of the Philippine Senate Seats by the Commission on Elections. He garnered over 16 million votes, landing 7th spot among the 12 new senatorial members.

According to celebrity net worth, as of 2020, Manny Pacquiao has a staggering $220 million net worth. This is primarily due to his boxing career and endorsements, among others.