Mardi Gras Falls On 1 March, The most popular time to visit New Orleans is the extended weekend before Mardi Gras. Mardi Gras, or “Fat Tuesday,” is the last day of the Carnival season as it always falls the day before Ash Wednesday, the first day of Lent.

The Mardi Gras or Fat Tuesday is celebrated every Tuesday before Ash Wednesday. It is also known as Shrove Day or Shrove Tuesday. During this day, people eat as much as they want because the following day is the Ash Wednesday – the start of a long fasting period for Christians. Furthermore, they also give up doing their hobbies to celebrate the Lenten period solemnly. Thus, Fat Tuesday is a celebration of eating and enjoying things that you like to do.

About the Mardi Gras

During the Mardi Gras or Fat Tuesday, people celebrate by feasting, doing festive activities, and parading. People cook as many foods as they can and eat as much as they want. Most families gather together during this day to feast on foods. Friends also conduct parties where they enjoy the company of each other. People also shout out on social media how they celebrate this day.

For centuries, Christians have celebrated Mardi Gras. All around the world, where Christianity exists, people celebrate this special holiday. Although the exact origin of the holiday is untraceable, the persons responsible for bringing the celebration to America are French explorers Pierre Le Moyne Sieur d’Iberville and Jean Baptiste Le Moyne Sieur de Bienville. In 1699, d’Iberville reached the mouth of the river on Shrove Tuesday near what is now Louisiana and named it Pointe du Mardi Gras. The first Mardi Gras celebration was held in 1703 in Fort Louis de la Mobile, which is the modern day Mobile, Alabama. When de Bienville established Nouvelle Orleans in 1788, Mardi Gras celebrations reportedly began immediately. In 1875, Louisiana declared Fat Tuesday an official holiday.

As mentioned earlier, Mardi Gras is celebrated every Tuesday before Ash Wednesday. This means that the dates of celebration for this event are as follows:

How long it lasts?

If you ask how long does Mardi gras last?  The holiday of Mardi gras is celebrated in Southern Louisiana, including the city of New Orleans.This celebration of carnival in Metairie with outdoor concerts by both national artists and Louisiana’s own! Because Easter can fall any Sunday between March 23 and April 25, and Mardi Gras is always 47days before Easter, Zulu and Rex can roll on any Tuesday between Feb. Parades through the French Quarter and the Marigny are walking parades,  not the traditional large float parades. 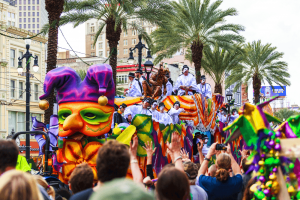 Early every year since the first official Mardi Gras parade in 1837, New Orleans has carefully marked the days until Easter, erupting into a colorful bacchanal when the calendar hits 47 days out from Easter Sunday. View themes, throws, celebrity riders and more for Mardi Gras 2021! That’s the call to riders dispensing beads and “Throws” from the elaborate floats of Mardi Gras.
Visitors are encouraged to explore New Orleans Mardi Gras traditions S, LOUISIANA. Mobile first hosted a Mardi Gras celebration in 1703, predating any celebration in New Orleans by at least a decade. Settled as the capital of the French Louisana territory, Mobile hosted celebrations and parades until 1718, when the capital of French Lousiana was moved to New Orleans.

KREWE OF TUCKS Café du Monde, as part of what has become a New Orleans

KREWE OF TUCKS Café du Monde, as part of what has become a New Orleans tradition, makes their coffee with chicory, the root of a blue-flowered perennial plant. Jpg Common Chicory Common chicory Coffee first came to European markets in the 17th century and quickly spread throughout the continent.
“In some parts of Germany,” Simmonds writes,” The women are becoming regular chicory toppers, making of it an important part of their daily sustenance. American take interest in chicory shared a corollary path to popularity, but first coffee had to take root as the beverage of choice.

During the American Civil War, Louisianans looked to adding chicory root to their coffee

When Union naval blockades cut off the port of New Orleans. With shipments coming to a halt,    desperate New Orleanians looking for their coffee fix began mixing things with coffee to stretch out the supply. Some manufacturers roasted chicory with two pounds of lard for every”Hundredweight,” or  cwt, of chicory “To give the chicory a better face.” Parsnips were also added occasionally; even burnt sugar was sold to coffee dealers and coffee-house keepers under the name of “Blackjack,” according to an 1874 article published in the Chemical News and Journal of Industrial Science.

Plastic beads weren’t always a part of Mardi Gras; they were introduced only in the late 1970s Howard mapped the levels of lead in various parts of the city, and discovered that the majority of lead in the soil is located directly alongside the Mardi Gras parade routes, where krewes toss plastic beads into the crowds.

“Beads obviously attract people, and they’re designed to be touched, coveted.” And then there are the beads that don’t get taken home. Independent research on beads collected from New Orleans parades has found toxic levels of lead, bromine, arsenic, phthalate plasticizers, halogens, cadmium, chromium, mercury and chlorine on and inside the beads.

Mardi Gras is a celebration ingrained in New Orleans’ culture

How did we get to the point where 25 million pounds of toxic beads get dumped a city’s streets every year? Sure, Mardi Gras is a celebration ingrained in New Orleans’ culture.
Revelers in New Orleans started flashing each other in return for Mardi Gras beads at the same time the free love movement became popular in the UnitedStates.The people in China are told these beads are valuable and given to important Americans, that beads are given to royalty. And of course, all evaporates when you realize,’Oh yes, there’s royalty in Mardi Gras parades, there are kings and queens, but it’s made  up and it’s fictitious.’ Yet we carry on with these crazy events that we know are harmful.” In other words, most people, it seems, would rather retreat into the power of myth and fantasy than confront the consequences of hard truth.

In the whole world celebrated the conclusion of Carnival and the start of the fasting period before Easter. The festivities ranged in character, but all emphasized spectacle. Enjoy this collection of photos of Carnival and Mardi Gras traditions from around the world. 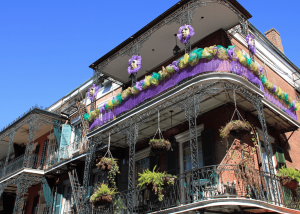 A melting pot of French, Spanish and Caribbean cultures, New Orleans is the perfect place for a Mardi Gras celebration, a party that signals the culmination of Carnival, the season from the Epiphany to Ash Wednesday, the first day of Lent. Literally translated to “Fat Tuesday,” Mardi Gras is meant to be a final celebration before the austerity of Lent, and has been celebrated since Medieval times.

New Orleans might be the biggest Mardi gras celebration in the country, attracting some 1.4 million visitors each year, but it’s not the only place that celebrates the beginning of Lent with a raucous party.
Jpg New Orleans might boast the biggest Mardi gras, but just two hours east, Mobile, Alabama, hosts the country’s original Fat Tuesday. Mobile first hosted a Mardi Gras celebration in 1703, predating any celebration in New Orleans by at least a decade. Settled as the capital of the French Louisana territory, Mobile hosted celebrations and parades until 1718, when the capital of French Lousiana was moved to New Orleans.

While the city of New Orleans – particularly the French Quarter – has been the Mardi Gras capital for centuries, the Big Easy is not the only city in America that puts on parades and events for the revelrous holiday. It’s widely believed that Mardi Gras first began in Mobile, Alabama just after the turn of the 18th century.

Not only does the entire city turn out, but Mobile draws thousands of visitors from around the world who are perhaps seeking the “Original Mardi Gras celebration,” as the local newspaper describes it.
St. Louisans claim it’s the largest Mardi Gras parade outside of New Orleans, with nearly 100 floats and more than 10 million strands of beads thrown along this year’s route.

The main reason why you should participate in the celebration of this day is that as a Christian, you will be able to prepare yourself for the Lenten celebration where you must fast or not eat your favorite foods in commemoration to Christ’s suffering, death, and revival. Celebrating this day is also a good kick-off for the Lenten season.

The following are the best things to do to make your celebration of the Mardi Gras as best as it can be:

Wear the traditional colors of purple, green, and gold

One good idea for your celebration of this day is to wear the traditional colors of purple, green, and gold for Fat Tuesday. It is rumored that when Grand Duke Alexis visited in 1872, his welcoming committee handed out purple, green, and gold beads to the party-goers that year, as they were the colors of his home. The trio of shades came to symbolize the festivities and were later given meanings: purple for justice, gold for power, and green for faith. You might want to try to wear these colors as well during the celebration.

The most popular dessert for this day is the King Cake. The Kind Cake is a fried and doughy, glazed and frosted, typically in the Mardi Gras colors. They’re usually circular and braided, to resemble a King’s crown. Most cakes are baked with a tiny baby figurine on the inside, and whomever finds the toy, as tradition holds, must host the next big party. For your celebration of this day, you might want to make your own King Cake or purchase one from the bakery or pastry shop.

You can also celebrate this day by feasting like there is no tomorrow. Eat as much foods as you want in preparation for the upcoming lent.