The Martin Luther King Jr. Day is a federal holiday in the USA which is held every third Monday of January each year. This day celebrate the life as well as the achievement of Martin Luther King Jr., an influential American civil rights leader. He is most well-known for his campaigns that sought to end racial segregation on public transport. He also fought for racial equality in the USA. 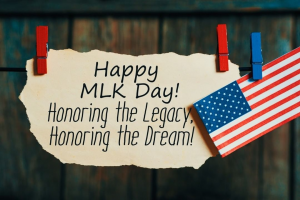 During this day, people conduct activities that let them promote equal rights for all Americans regardless of their background including race, gender, religion, and social status. People also take this day as their opportunity to inform other people about Martin Luther King Jr. and his campaign to fight racism and racial segregation.

The idea of Martin Luther King Jr. Day as a holiday was promoted by labor unions in contract negotiations. After his death, US representative John Conyers and US Senator Edward Brooke introduced a bill to make King’s birthday a national holiday.

Although the federal holiday honoring King was signed into law in 1983 and took effect three years later, not every U.S. state chose to observe the holiday at the state level until 1991, when the New Hampshire legislature created “Civil Rights Day” and abolished “Fast Day”. In 2000, New Hampshire became the last state to name a holiday after King.

On May 2, 2000, South Carolina governor Jim Hodges signed a bill to make King’s birthday an official state holiday. South Carolina was the last state to recognize the day as a paid holiday for all state employees.

As mentioned earlier, the Martin Luther King Jr. Day is celebrated every third Monday of January each year. This means that the dates of celebration for this event are as follows:

The following are the main reasons why you should participate in the celebration of the Martin Luther King Jr. Day:

King Worked on the Advancement of Civil Rights

King devoted his life for the sake of civil rights. His work ultimately led to the elimination of unfair practices in the nation which negatively affected people, particularly the black community. He helped in the organization of rallies, gave speeches across the country, and mobilized people to help end racial injustice. Hence, you must celebrate this day to commemorate King’s work on the advancement of civil rights.

King is an Inspiration to Us All

King’s work resonated even after he died and even up until now. He continues to inspire people in different aspects. He has helped a lot of people deal with community issues in order to achieve a more equitable social environment.

The following are the best things to do to make your celebration of the Martin Luther King Jr. Day as best as it can be:

One good idea for your celebration of this day is to learn more about MLK – his life and his works. You can perhaps read a book about him. You can also watch a documentary or a film that features him. It would really help you to get to know more about him, especially his drive to do what he did.

Let us all admit it, even though we have come far in solving social injustice, there are still some issues regarding this that the world still faces today. There are still some forms of discrimination faced by people in specific areas. There is no better time to raise awareness about these issues and to solve them than the MLK Day. Hence, you can celebrate this day by campaigning against social injustice and its different forms. This is also the perfect day to start conversations and keep them going on so that more and more people will be able to understand the issues and how to solve them.