Barbie is perhaps the most popular toy for little girls. Barbie is a fashion doll created by Mattel Inc., an American toy company. Barbie is considered to be the definition of the perfect physical beauty with her great look and body. There might not be a person in the world who does not know Barbie. Because of their much love for her, people celebrate a day of dedication for her called the National Barbie Day. 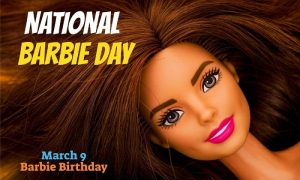 The National Barbie Day is celebrated every 9th of March each year. During this day, people do a lot of activities involving Barbie. Some people buy Barbie dolls for their little girls. Grown-up women look back in their past by bringing their used Barbie dolls out of the storage room. Others dress up as Barbie. There are a lot of things that people do during this day. All of these bring out the essence of the celebration. People also shout out on social media how they are celebrating National Girl Scout Day.

The creator of Barbie is Ruth Handler, an American businesswoman. The idea came up from her daughter, who played paper dolls and gave adult roles to them. In 1956, Handler bought three German Lili Dolls when she vacationed in Switzerland. She used these dolls as inspiration in creating Barbie. Although Barbie is widely regarded as a blonde, the first-ever Barbie created was of two versions – one blonde and one brunette.

The first-ever Barbie Doll was launched on March 9, 1959. This is considered the birthday of Barbie. Her full name is Barbara Millicent Roberts. From that point onwards, Barbie has become an essential part of the toy industry. She is also one of the first toys to have been marketed through television advertising. According to estimates, over one billion Barbie dolls have been sold in over 150 countries. In addition, a song featuring her called Barbie Girl by Aqua has become a popular song all over the world.

Origin of the National Barbie Day

Unfortunately, even with extensive research on this topic, we are not sure how this celebration started. We do not even know for sure who pioneered this holiday. But we know that the date of this holiday was chosen as March 9 because this is Barbie’s birthday. Furthermore, perhaps people have celebrated this holiday because Barbie has become a cultural icon not just in the USA but all over the world.

The following are the main reasons why you should participate in the celebration of this holiday:

Barbie is an Inspiration for Girls

One reason why you should celebrate this day is that Barbie is an inspiration for Girls. Moving away from her physical looks, Barbie actually has more than 150 careers. She has run for president, she is a CEO, and she is also an astronaut. Different Barbie Dolls have different careers. Little girls that play Barbie Doll can familiarize themselves with these different jobs and may want to pursue one among them in the future.

Barbie is also a trend-setter especially when it comes to fashion. Barbie Dolls are created with clothes not from already designed ones but originally made ones. A lot of fashion designers get their inspiration of clothes from those of Barbie. This is also another reason to celebrate this day – to honor the fact that Barbie is a trend-setter.

How to Celebrate: Ideas & Activities

The following are the best things to do to make your celebration of National Barbie Day as best as it can be:

One good thing to do to celebrate this day is to play Barbie, of course. Whether you are old or young, you should grab the Barbie doll given to you by your parents. Enjoy the time playing Barbie. Let her walk as if she’s in a pageant or going to work. Dress her up with all the clothes she has. Take pictures of her. Do anything that will let you enjoy your day playing with your much treasured Barbie Doll.

If you don’t have a Barbie Doll, then this day is the perfect opportunity for you to buy a new one. You can go to the mall and look for the best Barbie Dolls available there. There are lots of varieties. You can choose one from those. Or you can step it up by choosing more than one.

Listen to the Barbie Girl Song

You can also celebrate this day by listening to the Barbie Girl Song by Aqua. If you are not familiar with it, don’t get surprised that you do when you listen to it now. It is really a popular song that has become a part of our culture.