The National Doughnut Day is a holiday celebrated every first Friday of June each year. 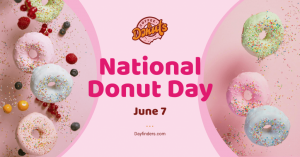 During this day, we celebrate our favorite round snack or dessert that has lots of available flavor. Some people call these desserts doughnuts while others call them donuts. They are actually pronounced the same but their spellings are quite different. Because of the extreme love for donuts by the people, we celebrate the National Doughnut Day each year. People enjoy celebrating this day as much as they enjoy celebrating the World Nutella Day. During this day, various activities related to doughnuts are conducted by people all over the world

What is National Donuts day?

National Donuts day originated in the United States on the first Friday of June each year. This day celebrates doughnuts. A doughnut is a fried dough confection which is usually eaten as dessert or as a snack. It now has various forms but the usual shape we see is the round one with a hole at the center. Though most donuts today don’t have these holes. Instead, they have fillings inside. During the National Doughnut Day, activities such as donut making, eating donuts, and donut parties are conducted by people.

“You can’t buy happiness, but you can buy donuts, and that’s the kind of the same thing.”

Since National donut day,  is not very far, so gear up and get ready for the sweetest celebration of this year.

The history of donuts is quite disputed and is not clearly known. What we know for sure is that the iconic shape of donuts with the hole in the middle started to make appearance in the USA during the mid-1800s. According to some rumors, it was a man named Hanson Gregory who created the donuts. There are people saying that the iconic shape of the donut was created by punching a hole in the center of a tin pepper box. During the early days of donuts, not much varieties and flavors were in existence. But now, we have lots of them. For instance, we have choco butternut, strawberry filled, avocado, Bavarian, blueberry cheesecake, and more.

What is the history of National Doughnut Day?

The National Doughnut Day started in 1938. The celebration started as a fundraiser for The Salvation Army of Chicago. The purpose of that fundraiser was to help those who were in need during the Great Depression were a lot of people were struggling financially due to the extreme economic crisis. Another purpose of that celebration was to honor the Salvation Army Lassies of World War I who served doughnuts to the soldiers. Now, the National Doughnut Day has become a yearly celebration. This celebration started in the US but it has already spread to different parts of the world.

When is National Doughnut Day?

This holiday is always celebrated on the first Friday of June each year. This means that this year, people will be celebrating the National Doughnut Day on June 4, 2021. 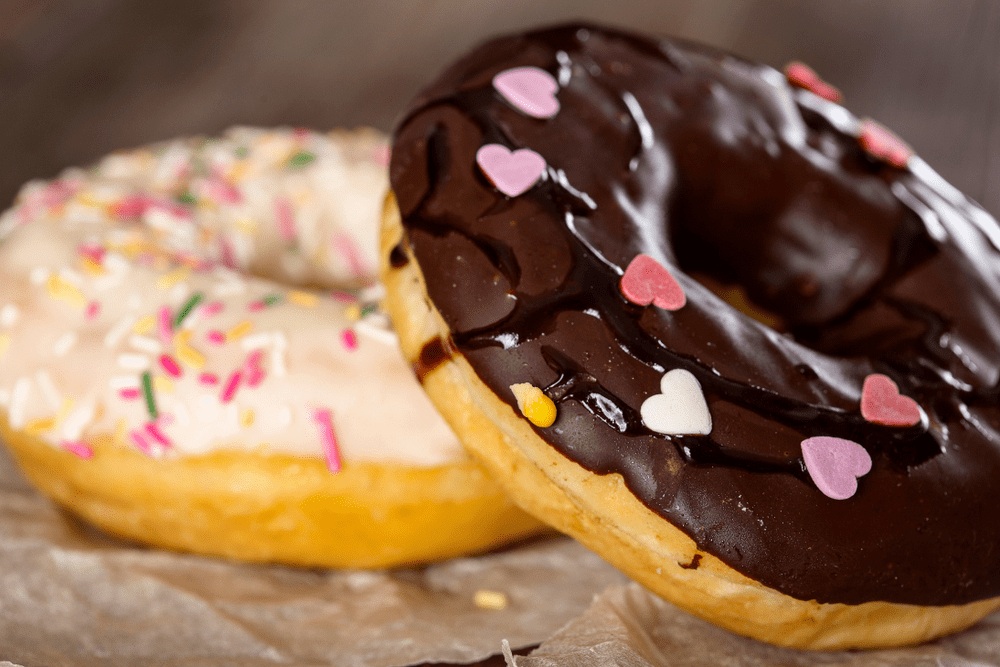 Let me share a few types of donuts, which are available with different names around the world.

So, this national doughnut day is a good chance to try all the different recipes of doughnut

What is to love about national donut day:

27 Facts About the National Doughnut Day: 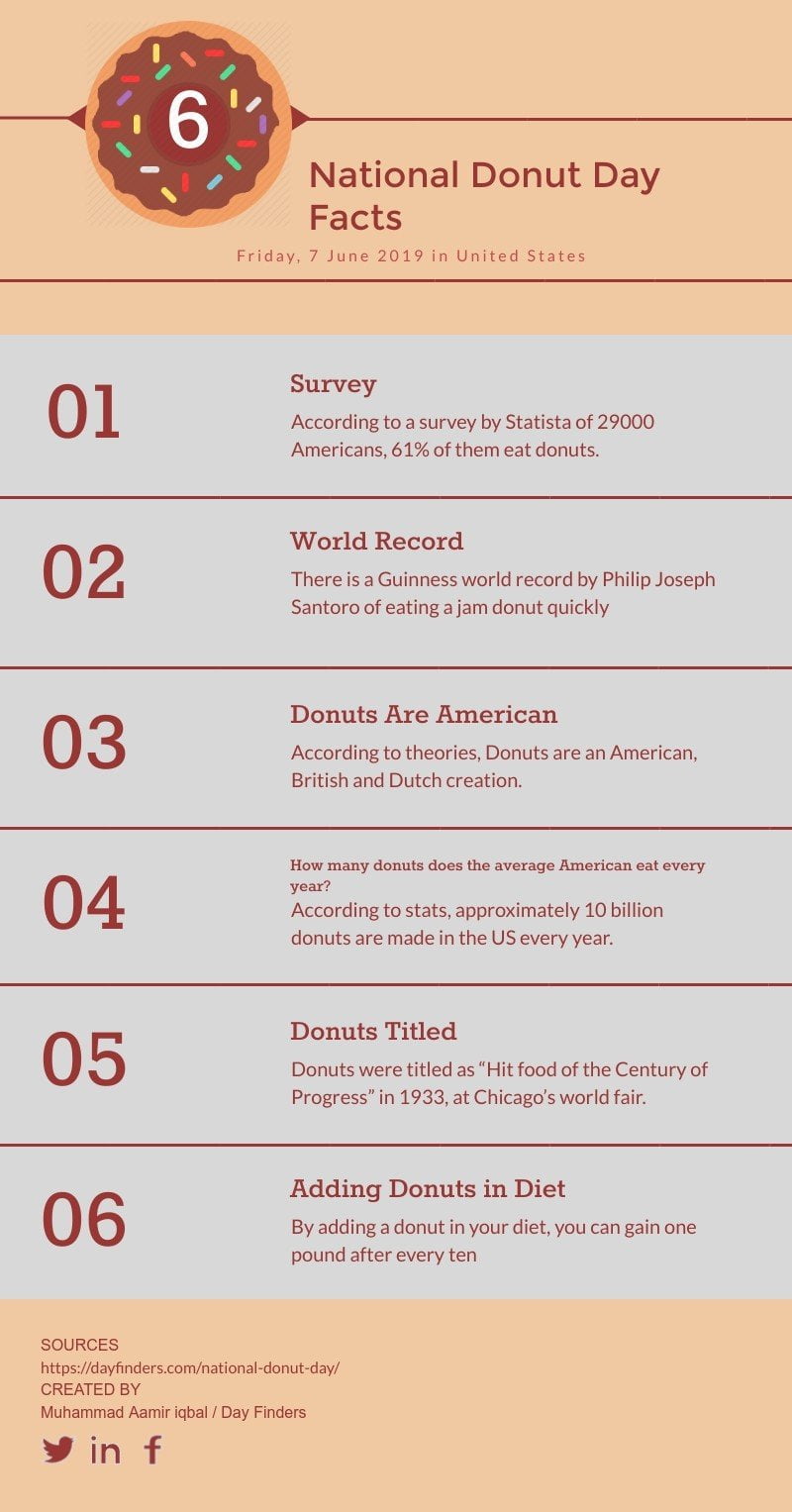 How to Celebrate National Doughnut Day?

Various activities are done by people to maximize their celebration of the National Doughnut Day and make it as fun and enjoyable as possible. Some of these activities are:

Indulge in Eating Varieties of Donuts

Make Your Own Donuts

You can make the celebration a lot more fun by making your own donuts instead of buying them. You can opt to either make fried donuts or baked ones. You can look for an online recipe or a cookbook that will teach you how to make good tasting donuts.

You can also take your celebration of the day on social media. For instance, you can use the hashtag #NationalDoughnutDay to let you friends and family know that you are taking part in this one of a kind celebration. 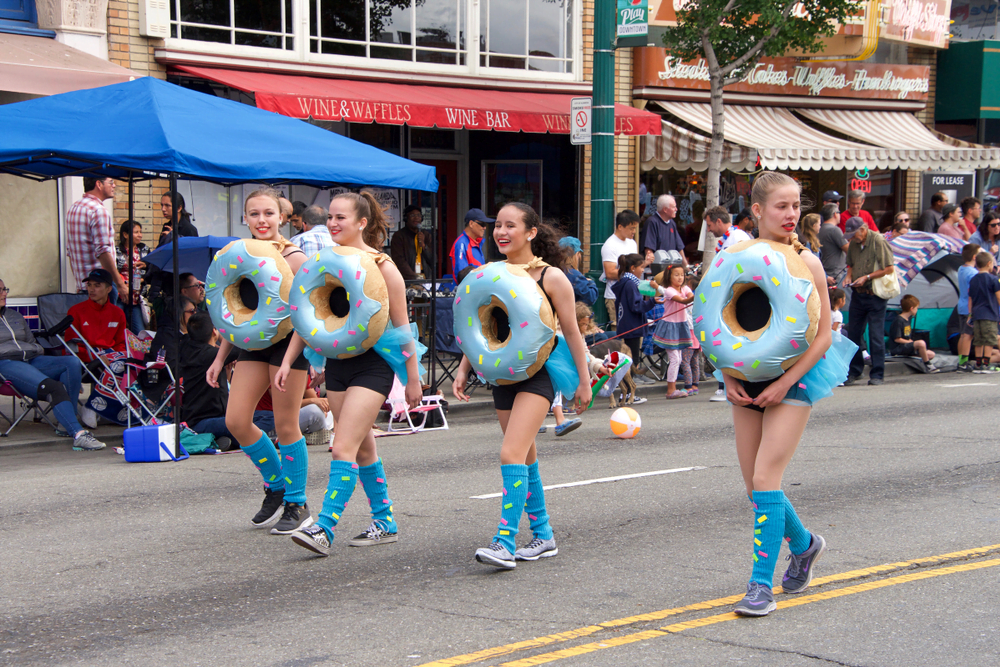