The National Pumpkin Pie Day is celebrated every 25th of December each year. This day gives recognition to pumpkin pie – everyone’s favorite pie variety. Pumpkin pie is often eaten during the fall and winter seasons. But they are also a specialty during the holidays – especially in Thanksgiving and Christmas. The Americans in particular love to eat pumpkin pie as a dessert. And with that, a special day is dedicated for it – the same day as Christmas Day. If you are a fan of pumpkin pie, then you should not miss the celebration of the National Pumpkin Pie Day.

About the National Pumpkin Pie Day

To make a pumpkin pie, the pulp of the pumpkin is mixed with eggs, evaporated and/or sweetened condensed milk, and sugar and is typically flavored with nutmeg, cinnamon, cloves and ginger. 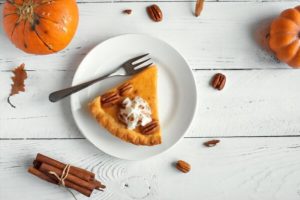 During the National Pumpkin Pie Day, people conduct various activities that let them achieve the objectives or purposes of the celebration. For one, people try to make their own pumpkin pie by mixing pumpkin pulp, eggs, evaporated milk, condensed milk, sugar, nutmeg, cloves, cinnamon, and ginger. Other people prefer to just buy some delicious pumpkin pie from a bakery or pastry shop that offers them. People also shout out on social media how they are participating in the celebration of the event. Millions of people take part in this day celebrations & same World Baking Day

The earliest recipes for making pumpkin pie can be found in 17th century cookbooks. One example is The Gentlewoman’s Companion by Hannah Woolley in 1675. A century later, different pumpkin pie recipes emerged in American cookbooks. Pumpkin pie also became a staple dish for Thanksgiving when the pilgrims brought the dessert back to New England. That time, pumpkin pies were made from pumpkin studded with apples, sugar, spices, and then baking it whole.

With limited knowledge about the origins of pumpkin pies, even less is known about the history of the National Pumpkin Pie Day. We don’t know when, where, and how it began. We also don’t have a clue as to who founded it. But still, we can make a good guess as to why such event was established in the first place. Perhaps a person or a group of people thought that pumpkin pies are much loved by the people. They must have then thought that it deserves a spot in the list of food holidays celebrated every year.

As mentioned earlier, the National Pumpkin Pie Day is celebrated every 25th of December each year. This means that the dates of celebration for this event are as follows:

The following are the best things to do to make your celebration of the National Pumpkin Pie Day as best as it can be:

Obviously, the best thing to do for your celebration of this event is to make a delicious pumpkin pie. To do that, follow the steps below:

Ingredients for the Pumpkin Pie:

Buy Pumpkin Pie from the Bakery

Another good idea for your celebration of this wonderful day is to order some pumpkin pies from the bakery or pastry shop. For sure, these stores will be offering lots of these baked goods during or even before the event because they expect that a great demand for this pie will come due to the celebration. Just make sure to buy one or some from a bakery or pastry shop that offers delicious pumpkin pies. A renowned pastry shop or bakery will do. This alternative is best for people who want to indulge themselves into some delicious pumpkin pies yet they do not have the time to make some for themselves.