The Pioneer Day is celebrated in Utah, USA every 24th of July each year. This day commemorates the entry of Brigham Young and the first group of Mormon pioneers into the Salt Lake Valley in Utah in 1847. This day honors the bravery of the original settlers as well as their physical endurance and strength of character.

About the Pioneer Day

The Pioneer Day is an official holiday in the state of Utah, USA. Some celebrations take place in regions that surround the states where Mormons pioneer first settled. During this special day of celebration, there are parades, fireworks, rodeos, and various other festivities to commemorate the entry of Brigham Young and the first group of Mormon Pioneers into Salt Lake Valley. This happened on July 25, 1847. During this day, many local and state-run government offices are closed. Most businesses and private companies also close for this occasion. 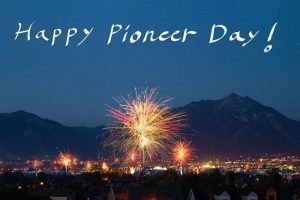 On March 4, 1959, the beehive because the official state emblem in Utah. Residents relate the beehive to industry and the pioneer virtues of perseverance and thrift. The beehive was chosen for the provisional state of Deseret in 1848. It became the seal of the state of Utah in 1896. The beehive is thus a major symbol for the celebration of Pioneer Day.

The official state motto is “industry”. It became so on March 4, 1959. This is associated with the beehive symbol. Early pioneers had limited resource materials. Hence, they relied on their own industry to survive. The word industry appears on both the state seal and the state flag.

The Pioneer Day commemorates the entry of Brigham Young and the first group of Mormon pioneers into Salt Lake Valley in Utah on July 24, 1847. The Mormon pioneers, after their arrival, believed that they have founded the Mormon homeland.

The Mormons left their settlement in Nauvoo, Illinois. They journeyed to the west and seek refuge from religious persecution. The final impetus for their trek was when prophet Joseph Smith was murdered on June 27, 1844.

The Mormons were determined to settle in an isolated region. So they made their way across the plains and over the Rocky Mountains to Utah. Unfortunately, many of them lost their lives due to disease caused by the winter months. When they reached Utah, they were overjoyed by the desolate valley. They soon planted turnips and potatoes. They even built a dam. With solemn ceremonies, they declared this settlement of theirs as the promised land. By the end of 1847, almost 2000 Mormons settled in Salt Lake Valley.

The first ever Pioneer Day was celebrated in 1849. There were parades, speeches, and band music. The 24th of July eventually became an official public holiday in Utah.

As mentioned earlier, the Pioneer Day is celebrated every 24th of July each year. This means that the upcoming Pioneer Day will be celebrated on Saturday, July 24.

The main reason why you should celebrate this Pioneer Day is to be able to commemorate the settling of the Mormon Pioneers in Utah. This is a must if you are a Mormon yourself. This is all about celebrating your origins and where you came from. It is also basically paying respects to the Mormon pioneers. Without their efforts for survival and establishing the promised land, you will not be able to be where you are right now as a Mormon.

During the pioneer Day, you should join various activities conducted for the celebration of this special occasion. You can spectate parades or even participate in it if you have the talent to do so. You can also have fun in joining rodeos. You can also watch the fireworks thrown at the night sky.

You can even enjoy with your family by spending time together at home. Or you can also go with them when you watch concerts and join festivals.

Family reunions are also popular during this day. So you may want to invite your relatives over to a party at your house and catch up with each other’s lives.