The Richter Scale Day celebrates the birth of the inventor of this item. It was American seismologist Charles F. Richter (1900-1985) who invented the Richter Scale back in 1935. Because of this machine, experts became able to monitor the movement of the ground and find out how intense or strong an earthquake is. Richter Scale day is always celebrated on the 26th of April each year. 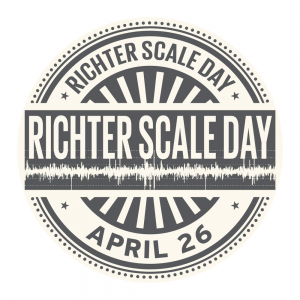 What is the National Richter Scale Day?

The National Richter Scale Day marks the birthday or birth anniversary of Charles Richter. Apart from being a seismologist, he was also a physicist. The day was created to honor and acknowledge him. He is known to be the man who taught the world how to measure the strength of an earthquake and with that, perhaps predictions can be discussed even in the soonest possible time so that the lives of many people can be saved.

Charles Richter was both on the 26th of April in 1900. He died on September 30, 1985. He invented the Richter magnitude scale when he was still working with Beno Gutenberg, his colleague in the California Institute of Technology, in 1935. After the scale was invented, it instantly became the standard scale for measuring the intensity of earthquakes.

However, after 1935, so many different variations and kinds of magnitude scales were developed or invented. Based on past reports and data, no standard one was used. Different experts and agencies used different kinds, some of which were invented or modified by the same people or agencies using them. But still, the Richter Scale remained the most popular one.

One major event when the Richter scale was used was during the 1960 earthquake in Chile called the Great Chilean Earthquake. It had a magnitude of 9.5 which was a quantity measured using the Richter Scale.

Ever since the scale became popular, people from all over the world started to celebrate the birthday of Charles Richter as the Richter Scale Day.

When is National Richter Scale Day?

As mentioned above, the Richter Scale Day is always held on the 26th of April of each year. This means that this year, the Richter Day will be celebrated on April 26.

There is no other day than this day to have fun knowing what the Richter Scale is and trying to use to for the first time. Apart from that, there are so many activities done during this celebration. Some of them are the following:

Education about the Richter Scale

Since this day is all about the Richter Scale, education about this device will never be gone during the celebration of the day. Many people, both young and old, get the chance or opportunity to be able to become familiar with the device. They are taught about its parts, its functions, its history, and how to use it in actuality. This is also a great day for aspiring seismologists. They can either learn more about this special device or share their current knowledge about it with their friends and loved ones.

Another activity always held during this day is educating people about Charles Richter since he was the inventor of this device. This is expected to serve as an inspiration to many people to invent various things that can advance the technology of human beings and hence advanced our knowledge in our life on Earth.

This celebration will always be present on social media. So many people participate in the celebration by being present on their social media accounts and sharing various information and things about earthquakes and the Richter Scale. Not only that, they also share information about the very person who invented the device – Charles Richter. In addition, many people also share the hashtag #RichterScaleDay to remind other people about the celebration and encourage them to take part in it.