Sake Dean Mahomed was an Indian traveler, entrepreneur, and surgeon who was one of the most notable early nnon-European immigrants to the Western World. Because of his foreign origin, his name is often misspelled when documented in English. 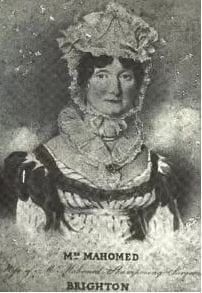 He was the one responsible for introducing shampoo baths and Indian cuisine to Europe. He also offered therapeutic massage. He was the first Indian to publish a book written in the English language. Although the exact dates are unknown, he was born in May 1759 and died in 1851.

Sake Deam Mahomed was born in May 1759 in the city of Patna, formerly part of the Bengal Presidency in British India. He came from a Bengali Muslim family. His father, who belonged to the traditional Nai (barber) caste, was employed by the British East India Company. He had studied alchemy and understood the methods used to produce various alkalis, soaps and shampoo. He later described the Mughal Emperor Shah Alam II and the cities of Allahabad and Delhi in rich detail and recorded the faded glories of the Mughal Empire.

Sake Dean Mahomed grew up in Patna but his father died when he was young. At 10 years old, he was taken under the wing of Captain Godfrey Evan Baker, an Anglo-Irish Protestant officer. Mahomed served in the army of the East India Company as a trainee surgeon and served against the Marathas. He remained with Captain Baker until 1782, when the Captain resigned. That same year, Mahomed also resigned from the Army, choosing to accompany Captain Baker, ‘his best friend’, to Britain.

Publishing a Book in English

In 1794, Mahomed became the first Indian to write and publish a book in English titled “The Travels of Dean Mahomed, a Native of Patna in Bengal, Through Several Parts of India, While in the Service of The Honorable The East India Company.”

Mahomed’s book was influential and brought about various changes. His book detailed his career in the army, his times in India, and his perspectives and views in England. According to Harlan Whatley from the University of Texas, the book “presented for the first time the idea of England from an Indian immigrant’s point of view and altered the ‘Orientalist’ outlook of early Western travel writings about the East.”

Opening of the First Indian Restaurant in England

In 1810, Mahomed opened the first ever Indian restaurant in England with the name Hindostanee Coffee House located in London’s Portman Square. The restaurant was described as offering “such delights as the Hookha ‘with real Chilm tobacco, and Indian dishes, … allowed by the greatest epicures to be unequalled to any curries ever made in England; with choice wines.” Unfortunately, business failed, and Mohamed declared bankruptcy in 1812.

In 1814, Mohamed’s biggest success came after he moved south to Brighton. He capitalized on the place’s reputation as a therapeutic getaway by opening a bathhouse. He used Indian oils and herbs to treat his guests. This became a great success.

One of the most famous treatments in Mohamed’s bathhouse is shampooing. This came from the Hindi word champissage, which means head massage. This technique became popular with the king who appointed Mahomed as his shampooing surgeon. This position was maintained under William IV, the king’s successor. Mohamed eventually received a Royal Warrant for his work, which means that he had provided goods and services to the royal family.