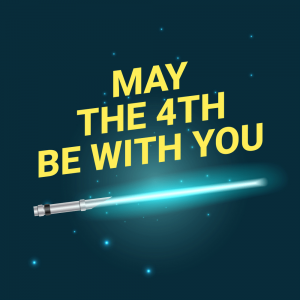 One of the most popular franchises of all time is Star Wars. Perhaps anywhere you go, people will always recognize Star Wars whether it be the books, the TV series, or the movies. Because of its immense popularity and extensive influence in our lives, a special day has been dedicated for Star Wars. Every 4th of May each year, we celebrate the Star Wars Day.

This expression first appeared in the press on May 4, 1979, but, oddly enough, it had nothing to do with the George Lucas film. On that day, the London Evening News appeared in the ad for the conservative party in honor of the inauguration of Margaret Thatcher as prime minister of Great Britain said: (“May the Fourth Be with You, Maggie“).

Star Wars is a kind of compilation, but these elements have never appeared in one story before, no one has filmed them. Much is taken from westerns, mythology and samurai films. It’s like taking the best and putting it together. This is not one scoop of ice cream, but a whole side.”

One of the most popular franchises of all time is Star Wars. Perhaps anywhere you go, people will always recognize Star Wars whether it be the books, the TV series, or the movies. Because of its immense popularity and extensive influence in our lives, a special day has been dedicated for Star Wars. Every 4th of May each year, we celebrate the Star Wars Day.

What is Star Wars Day?

This Day celebrates the Star Wars which is a media franchise created by George Lucas. The fans are the ones who celebrate this day. Since the start of celebrating this day, it has quickly spread through media and various grassroots celebrations.

The celebration has massive presence online. Many fans from all over the world connect with each other so that they may continue the celebration together.

The first ever record of the celebration of this day can be traced back to May 4, 1979, which is the day when Margaret Thatcher took office as the Prime Minister of United Kingdom. There was an online news article saying “May the Fourth Be with You, Maggie. Congratulations”.

This saying was then used again in the UK parliament defense debate held on May 4, 1994. In 1999, a Star Wars dedicated fan named Jeanne Cavelos, created a book called The Science of Star Wars and included the saying in it.

In 2008, many Facebook groups appeared which celebrated Luke Skywalker Day using the same catchphrase. Although the first group never received critical acclaim or recognition for this, the phenomenon quickly spread across various college campuses. This is when Star Wars Day was born.

The first ever organized celebration of the Star Wars Day was held in 2011. It was held in Toronto, Ontario, Canada. More specifically, it was held in the Toronto Underground Cinema. The festivities were produced by Alice Quinn and Sean Ward. Activities included the original Trilogy Trivia Game Show, a costume contest with celebrities as judges, the best tribute videos from the web, parodies, remixes, and mash-ups.

When is Star Wars Day?

The date of this day was chosen as pun for the catchphrase “May the Force be with you”. Hence during the celebration, many participants share the phrase “May the 4th be with you”. Even if the holiday was not declared or created by Lucasfilm, the distributor and primary producer of the Star Wars franchise, many fans all over the world choose to celebrate this holiday on this date. Because of this, Lucasfilm has embraced this unofficial holiday as the day of celebrating the franchise they have created.

Since the franchise has enormous amount of fans all over the world, different fans celebrate the day in different ways. Here are some of them.

Various fans from different parts of the world gather together in one place wherein an event for the day is celebrated. Though the location may vary, dedicated fans do not consider this a hindrance for joining in on the celebration. Organizers of the event may also vary each year. In this festival, many kinds of activities are held including game shows about the franchise, film watching, costume contests, and more.

Those fans who cannot go to the main festivities opt to celebrate by themselves at home with their family and friends who also love the franchise. They conduct movie marathons of Star Wars and they watch the different films either in chronological order or in the order when they were released.

Many fans of Star Wars celebrate the day by doing lightsaber fights. They enjoy fighting together using swords that emit lights. Each sword has its own color. Some special swords can even change their colors. If you own one, then you can choose the lightsaber color that matches that of your favorite character’s.

Franchise adoration is perhaps the simplest way to celebrate this special day. You can reread the books, watch the movies, or go to stores that sell various things related to this franchise. Many people also do costume parties, which are simply regular parties but with people dressing up as their favorite Star Wars characters. The party’s venue is also customized and decorated to suit that of a specific location in Star Wars.

George Lucas in an interview

The starting point for the creation of Star Wars was George Lucas’ desire to revive the idea of “cowboys in space” – adventure action films in the cosmic entourage, with chases and shootouts, with the opposition of good and evil. This concept, he learned in his childhood years spent in the city of Modesto, from comics and TV series (first of all, about Flash Gordon and Buck Rogers). In turn, all these works originate from the “Martian Series” about John Carter Edgar Rice Burroughs. In May 1971, Lucas tried to acquire the rights to the Flash Gordon trademark from the King Fishers studio, but the announced price was too high; this event and prompted him to create an independent franchise.

“And then I realized that I could invent a character as easily as Alex Raymond, who wrote him off from the books of Edgar Rice Burroughs. This is a standard superhero in space. I realized that I really wanted to make a modern fantasy action movie.” 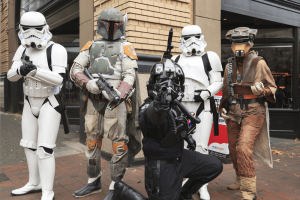 Influence series of Flash Gordon in the films “Star Wars” is seen in a variety of manifestations, ranging from opposition to the Rebel and Imperial forces and ending Cloud City and introductory “swam away” caption at the beginning of each film of the saga. Laser swords, ray pistols, cloaks, medieval costumes, magicians, rocket ships and space battles were borrowed from this and similar comics and television series. From Burroughs himself, in addition to adventure heroics, Lucas borrows a number of elements, for example, the name “Sith” (in the “Martian Cycle” these are giant invulnerable evil insects).

But Lucasfilm took many more years to officially put this phrase into circulation.

The first organized Star Wars Day took place on May 4, 2011, in Toronto. The celebration included a costume contest, a contest for the knowledge of the facts about the Star Wars universe, and other things that are dear to fans’ hearts. The date is celebrated to this day.

Studio Disney in 2013 officially recognized on May 4th. From this day on, Disney Parks is celebrating Star Wars Day.

On Wednesday evening, a funny video appeared in the Jimmy Fallon show, assembled from various franchise films. The heroes of Star Wars using the Smash Mouth song “All Star“.

The eighth film of the series, Star Wars: The Last Jedi, will be released on Russian screens on December 14th.

Also, Read about this Upcoming Event International Day without diets

This Story began many thousands of years before the birth of Luke Skywalker … or Anakin Skywalker … or even Obi-Wan Kenobi. It covers galaxies and epochs, a detailed chronicle of the events of Star Wars, describes periods of elevation and decline of dynasties and outstanding personalities that influenced the course of History itself. And now, finally, many sources of this extraordinary saga – from world famous movies to reliable literary sources – are combined into one representative volume. Feel the spirit of the times of the fall of the Empire and the birth of the New Republic, the atmosphere of the Jedi Academy of Skywalker, the atmosphere of love, friendship and dedication against the background of legendary events. Learn all and even more about George Lucas Star Wars.

There was this holiday because of a funny game of words. There are many words in English that are written differently, and the meaning is different, but the peculiarities of their pronunciation are such that they sound almost the same. In this and curiosity.

The famous Jedi farewell phrase “May the Force be with you” is written in English: “May the force be with you.” Someone from the fans of the film, obviously not deprived of a sense of humor, once beat this phrase as “May the fourth of Maybe with you”, emphasizing that the English word “May” can be translated as the name of the month, but the word “force” ( force) replacing the word “fourth” (fourth).

It’s true that May 4, 1979, when the first film of the saga was almost two years old, was chosen by British Prime Minister Margaret Thatcher in the English news with this phrase.

The first film of the saga was released on May 25, 1977. By the way, in our country for the first time, it was officially shown in two cinemas in 1988 as part of the “Days of the United States Cinema in the USSR”. In 2007, to the 20th anniversary of the release of the first film “Star Wars. But among fans, the date of May 4 is more popular.

The first mass celebration of Star Wars Day was held in 2011 in Toronto (Canada), accompanied by a costume procession, video and show program. Since then, the holiday has been organized annually, and its dissemination is helped, including by activity in social networks.

And I want to congratulate all the fans of the Star Wars film saga: May the Force be with you! Especially May 4th!