The Independence Day of Vietnam (Vietnam National Day) is observed annually on September 2, commemorating the day in 1945 when Vietnam under the leadership of Ho Chi Minh declared its independence from French colonial rule.

Across the country, Vietnamese celebrate this national holiday by honoring the ancient leaders who fought for the country’s freedom and engaging themselves into cheerful festivities such as fireworks, concerts and dance shows.

Vietnam National Day, also known as Vietnam Independence Day is a national holiday in Vietnam observed every year on 2 September. This monumental occasion commemorates the day when Vietnam gained independence from the French colonial control and the revolutionary leader Ho Chi Minh read the Vietnam Declaration of Independence at Ba Dinh Square in capital Hanoi on 2 September 1945. 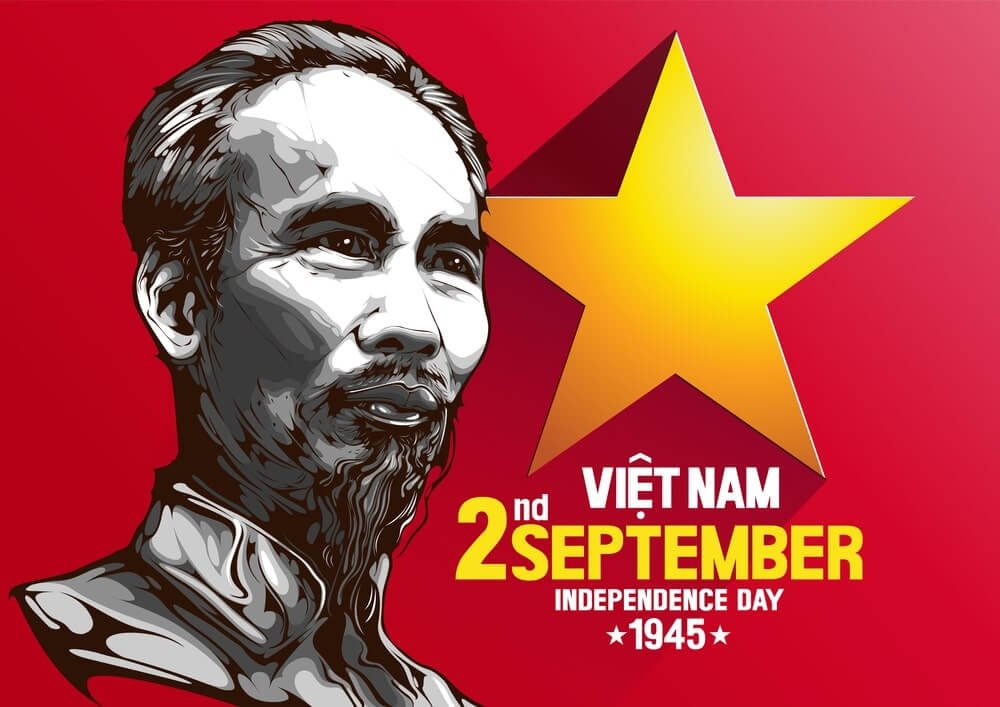 Vietnam was part of French Indochina, a French colony in Southeast Asia established in 1887. Indochina was controlled by France up until World War 2 when France was invaded by Nazi Germany and Japan invaded Indochina in September 1940. The Japanese occupied Vietnam but allowed the French to remain some influence, ruling Vietnam through the former French protectorate Emperor Bao Dai as a puppet.

Taking full benefit of the powerless-situation created in the state, Vietnamese revolutionary leader Ho Chi Minh made his way to Vietnam from China in 1941. Ho Chi was visiting his homeland for the first time after spending 30 years in exile. Ho and his initial few followers lived in primitive conditions in the dense forests and mountainous jungles along Vietnam’s border with China.

From here, Ho built his strong guerrilla force known as “Viet Minh” which rose up against the Japanese occupiers and fought for Vietnamese independence. The Viet Minh army registered several victories over the colonial masters and gradually started getting control of more and more Vietnam territory.

Meanwhile, the incredible achievements of Viet Minh attracted the attention of the US. In March 1945, a high profile officer from the U.S. Office of Strategic Services (OSS) met Ho Chi Minh in China. Both of them quickly signed a deal. The OSS would equip the Viet Minh army with light arms and radios. In exchange, the Viet Minh would provide intelligence to the OSS, give a hard time to the Japanese forces, and rescue American pilots shot across Viet Minh’s territories.

In July 1945, some OSS officers parachuted from their aircraft into northern Vietnam to give advanced military training to the Viet Minh. The medical team of the OSS officers also treated Ho Chi Minh, who was at that time was deathly ill due to malaria, high fever, and dysentery. Due to medical treatment by the OSS, Ho Chi recovered quickly.

After the Japanese defeat in August 1945 and French forces disappeared from Vietnam, a power vacuum was created in the state. Ho Chi Minh set his foot for the first time in his country’s biggest city of Hanoi where he was warmly welcomed by the locals. The streets were decorated with Viet Minh flags and everywhere there were chants of Vietnam independence.

On September 2, 1945, in front of a huge crowd of hundreds of thousands of locals, Ho Chi Minh declared Vietnamese Independence and Hanoi as its capital. He began his speech with the words that were made in the 1776 US Declaration of Independence:

“All men are created equal. They are endowed by their Creator with certain inalienable rights, among them are Life, Liberty, and the pursuit of Happiness.”

Vietnam which was once a part of French Indochina now emerged as an independent nation known as the Democratic Republic of Vietnam under the leadership of legendary Ho Chi Minh.

The day of September 2 dawns with a high patriotic spirit in Vietnam. The towns and cities which remain peaceful throughout the year, are now brimmed up with excitement. 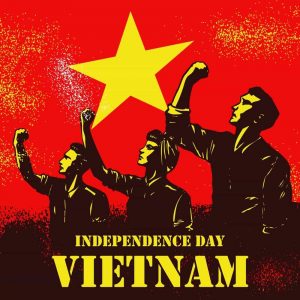 The streets are beautifully decorated with lights, flowers, and Vietnamese national flags. At every step, you will see notice flags perched from houses, shops, and buildings. On main boulevards, there are oversized posters of Vietnam hero Ho Chi Minh pasted at poles and billboards.

There’s a colorful atmosphere of great rejoicing and festivity everywhere. A large number of locals dressed in Vietnam flag dresses – head out to the streets, parks, and monument squares – carrying with them posters of Ho Chi Minh, Vietnam independence day slogans, and flags. Colorful fireworks are also an important part of the celebrations.

The grandest of the Vietnam National Day celebrations are held at the iconic Ba Dinh Square in the capital Hanoi, where Ho Chi Minh read aloud Vietnam’s Declaration of Independence. Attended by thousands of locals, there’s a grand military parade, singing of the national anthem, flag-raising ceremony, and rousing speeches by the state heads.

As September 2 is a national holiday, so it’s a great time for families and friends to bond and celebrate the occasion together by feasting, dancing, and heading to recreation spots.

The national flag of Vietnam is the same flag which was designed and used in 1940 by the Viet Minh in the freedom struggle of Vietnamese. It is a red flag with a large yellow 5-pointed star in the middle. Here’s what the flag symbolizes:

When did Vietnam gain its independence?

Vietnam gained its independence on September 2, 1945.

How did Vietnam gain its independence?

Vietnam gained its independence from French colonial rule because of the freedom struggle made by Ho Chi Minh and his guerrilla force Viet Minh.

What was the turning point in Vietnam’s freedom struggle?

How many years of Vietnam independence in?