The Ati-Atihan Festival is an annual festival in the Philippines held every 3rd Sunday of January each year. It is mainly celebrated in the town of Kalibo in Panay Islands in the Philippines but nearby towns also celebrate it. It is known as a very colorful celebration and one of the wildest fiestas in the country. This festival is held each year to honor the Santo Nino. 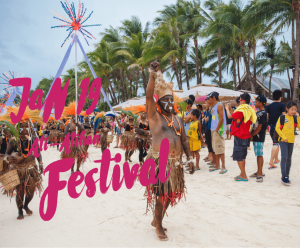 What is Ati-Atihan Festival?

The term Ati-Atihan means “to make believe Atis” or “to be like Atis”. Ati is the name of the indigenous natives of the islands before the Malays arrived in the 10th century and the Spaniards in the 16th century. During this festival, various activities are held. There are tribal dances, the people showcase their tribal music, costumes, and weapons, and there are also parades along the streets. Christians also observe this day by conducting religious processions.

This festival has inspired others festivals in the Philippines including Cebu’s Sinulog Festival and Iloilo City’s Dinagyang festival. The Ati-Atihan Festival is also known as the Mother of All Philippine Festivals.

What is the History of Ati-Atihan Festival?

The origin of the Ati-Atihan Festival can be traced back to when the Atis started the celebration together with the Malay people. Changes were then introduced when the Spaniards came to colonize the Philippines.

How Did the Ati-Atihan Festival Start?

According to historians, the origin of the Ati-Atihan Festival can be traced back to when a group of 10 Datus or Malay chieftains fled from the island of Borneo and then settles in the Philippines. These people were granted settlement by the Ati people which were the tribes of Panay Island. A Datu named Puti made trade with the native people and bought some plains in exchange for golden salakot, bales of cloth, and brass basins. They also gave a long necklace to the wife of the Ati leader. Soon after, feasting and festivities were done.

The Ati people, living in the mountains above the plains where the Datus settles, experienced famine because of bad harvest. Hence, they were forced to descend from the mountains down to the settlements where the Malays lived. They seek the generosity of the datus to which the latter responded positively. They were given food and in return, the Ati people danced and sang for them as a way of expressing their gratefulness for the foods they were given.

What is the History of the celebration of Ati-Atihan Festival?

The celebration as described above became a staple activity for the Ati people and all the Malays they lived together with. However, the Spanish colonization introduced some changes for the festival. Long before the Spaniards came, the Ati-Atihan Festival was a pagan festival celebrated by a tribe that practiced Animism where they worshipped an anito god. However, when the Spaniards came into the country, they gradually inputted Christian meaning into the festival. And today, Ati-Atihan is now celebrated as a religious festival where the Santo Nino is worshipped.

When is Ati-Atihan Festival?

This festival is always held on the third Sunday of January each year in the Philippines. However, Sunday is only the main festival day. it is usually celebrated week-long especially in Panay islands and the nearby towns. The upcoming Ati-Atihan Festival will be celebrated in the Philippines on January 17, 2021.

How to Celebrate Ati-Atihan Festival?

The Ati-Atihan Festival is full of various activities that are held on a week-long basis. Those who enjoy participating in this festival are not only those citizens living in the islands where the festival is celebrated. Various citizens from other islands also come to participate in the celebration. Even foreigners or people from other country visit the Philippines during this time to participate in one of the most fun and enjoyable events in the country. Some of the most important activities during this celebration are: 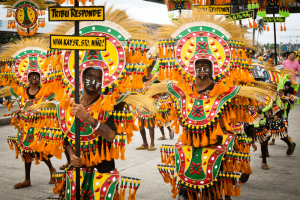 Watching the Parade of Tribes and their Floats

Perhaps the most popular activity for the Ati-Atihan Festival is the parade of tribes and their floats. This is actually called the Mardis Gras of the Philippines. The parade is joined by the people wearing costumes and painting various parts of their body in black or other color in order to honor the Ati people, known as the Negritos or the Aetas. This parade is joined by people, both young and old.

One of the liveliest activities of the day is the Ati-Atihan street dancing activity. Here, people enjoy dancing to the beat and shouting the praise “hala bira purya pasma” which means dispense all means or pour. The phrase “Viva Kay Senor Santo Nino” which means Long Live Child Jesus is also a popular phrase shouted by the people. People enjoy the cheers, loud drum beats, and foot stomps. People participate by pouring out all their energy in the street dance they perform.

Listen to the Ati-Atihan Music

The music also makes the celebration all the more fun to join in. The indigenous tribes showcase their own kind of music that are unique and different from what we usually hear today. People also enjoy Filipino Music since the festival are joined in by the most popular bands and singers in the country. 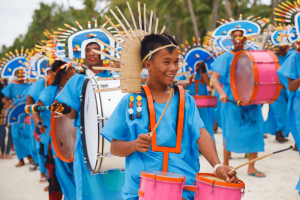 Religious processions are also conducted for the celebration of this day. Such processions aim to honor the child Jesus Christ. Some of the processions are solemn while others are energetic where people dance with their Santo Ninos.

Of course, trade fairs and food parks will always be there in the celebration for all the tourists to enjoy. You can perhaps visit the food parks to get a taste of the delicious local delicacies. You can also visit the trade fairs to see the many kinds of things being sold which you can bring home as souvenirs.

Facts About the Ati-Atihan Festival

The most interesting facts about the Ati-Atihan Festival are the following: