Happy Independence Day Austria! This national holiday (October 26) marks the end of the country’s post-WWII occupation and the Declaration of Neutrality. It’s the day in the history when the last troops left Austria after the allied occupation in 1955, and the country was finally on the path to its independence.

Austrian National Day (also known as Austria Independence Day) is celebrated annually on 26th of October. The day celebrates the birth of the Austrian Nation as a completely independent and sovereign state. This special event also commemorates the passing of the Declaration of Neutrality, a constitutional law on permanent neutrality. 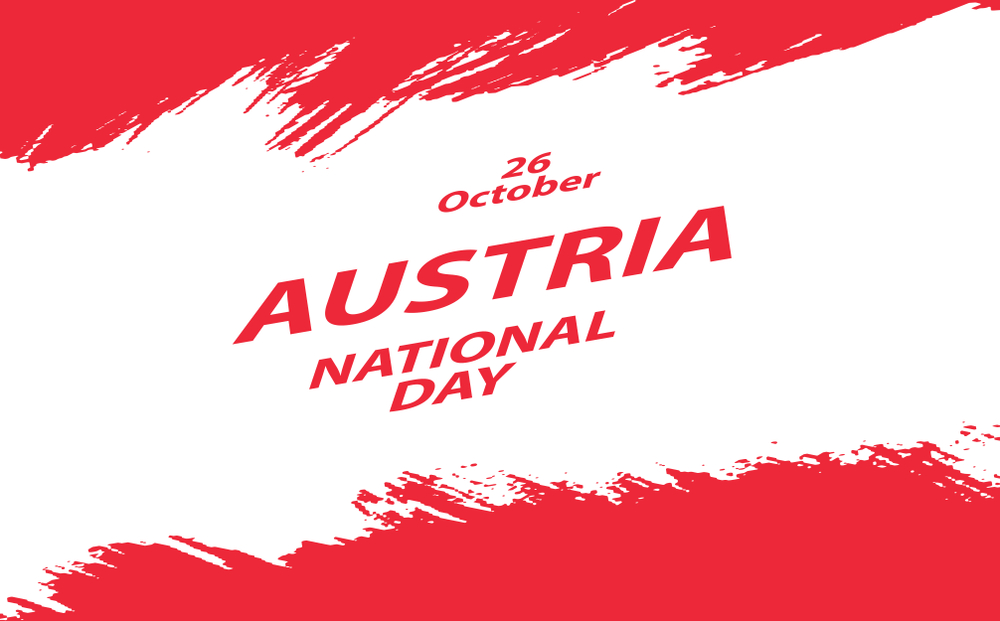 National Day of Austria in 2021

This year’s Austria National Day will be celebrated on Saturday, 26 October, 2021. The day will celebrate Austria’s 64 Years of Independence or 64th Independence Anniversary – since gaining independence in 1955 when the Soviet Union ended its rule over Austria.

National Day of Austria is celebrated every year on October 26 and commemorates the day in 1955 when the Soviet Union ended its rule, and Austria passed a law of permanent neutrality. But how did Austria gain Independence? How was Austria founded? 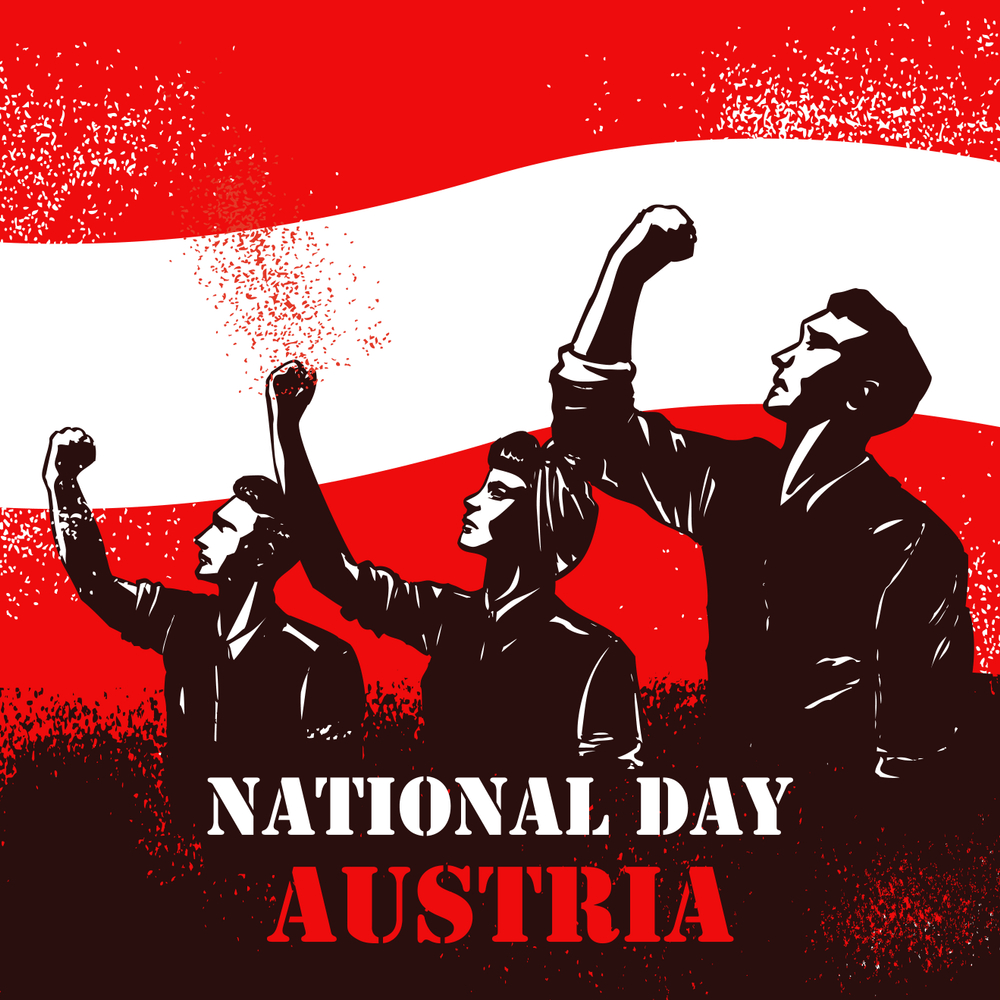 To get a thorough understanding of Austria’s Independence Day history, you have to go back to 976, when Leopold von Babenberg became the ruler of present-day Austria.

In 1276, Rudolf I became the first Habsburg to rise to the royal position. The Habsburgs ruled for the following 750 years, a period during which the Austrian Empire gathered huge land wealth and fought off difficulties from the Ottoman Empire.

In 1848, Franz Josef I ascended to the throne and we saw many major developments in Austrian history, including the Austro-Hungarian Compromise of 1867, which gave greater political rights to Hungary within the Empire and established the Dual Monarchy.

In the twentieth century, political solidarity continued to deteriorate. Following World War I, the Empire crumbled and the Austrian Republic was set up in 1919. From 1919 to 1934, Austria experienced expanding political unrest. In 1934, a dictator government came into power in Austria, and soon thereafter, Austrian National Socialists launched an unsuccessful coup d’état.

In February 1938, under restored dangers from Germany, Chancellor Kurt Schuschnigg was forced to accept Austrian National Socialists (Nazis) in his government. Hitler had manipulated Austria into being annexed by Germany. This was known as the Anschluss and denoted the start of the impacts of the Nazi Holocaust (oppression of the Jews) in Austria. A month later on March 12, Germany sent its military forces in Austria. The country was occupied by Nazi troops for nearly seven years, until the end of the war.

The 1955 Austrian State Treaty ended the four-zone occupation and recognized Austria as an Independent and Sovereign state. The treaty was signed on May 15, 1955, in Vienna’s Schloss Belvedere and came into effect on July 27, 1955.

On October 25, 1955, the last allied troops left Austria. The country became independent again and was known as the Second Republic of Austria. A day later on October 26, the Austrian Parliament passed the constitution law on permanent neutrality, which has been celebrated as Austrian National Holiday, i.e the first day without foreign troops on Austrian soil.

*Do You Know? The Austrian National Holiday was celebrated for the first time in 1965, ten years after the signing of the Austrian State Treaty.

The National Flag of Austria

The National Flag of Austria has three equal horizontal bands of red, white, and red. The triband is based on the coat of arms of the Babenberg dynasty, recorded in the 13th century. 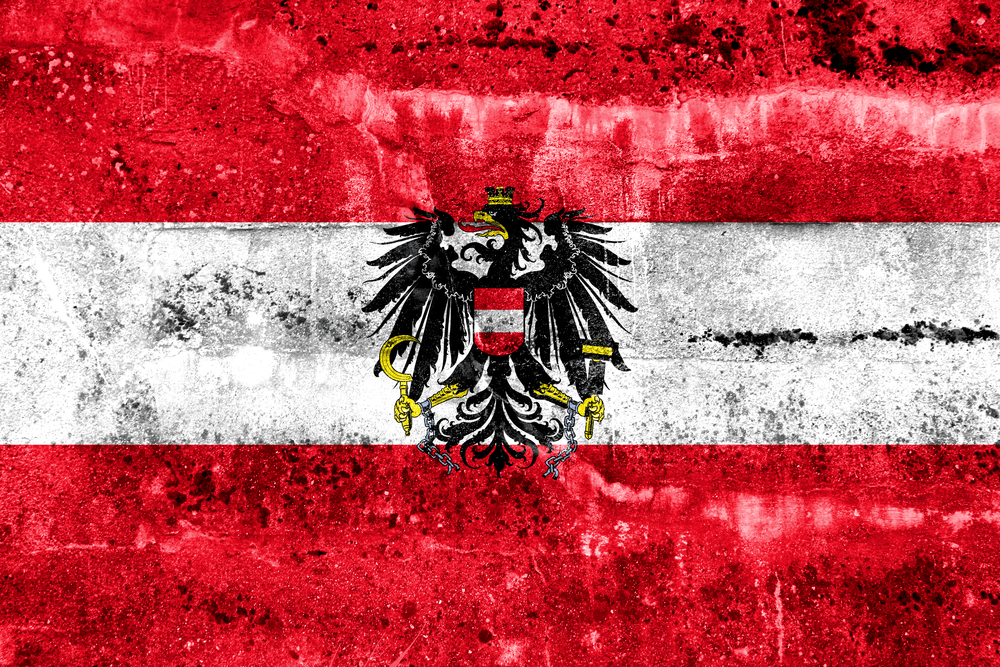 According to the legend, the flag was first invented by Duke Leopold V of a result of his fighting during the Siege of Acre. After a fierce battle, his white surcoat was totally doused in blood. When he removed his belt, the cloth underneath stayed unstained, revealing the combination of white-red-white. So taken was he by this particular sight that he embraced the colors and scheme as his banner.

Since 1965, October 26th has been celebrated as Austrian National Day. In 1955, the country had declared its permanent neutrality and came to be known as the Second Republic of Austria.

The National Day of Austria is celebrated with great enthusiasm and pride. This day is an occasion to promote patriotism and national unity. On this special day, the Austrian National Flag is hoisted at all public and private buildings. Memorial ceremonies are held across the country, federal museums offer free entry to visitors.

A very unique tradition on National Day is the “fitness marches” (Fit-Märsche). These are long fitness walks organized throughout the country and attract thousands of tourists and citizens each year. The aim of this is to promote fitness and raise awareness of a healthy lifestyle. 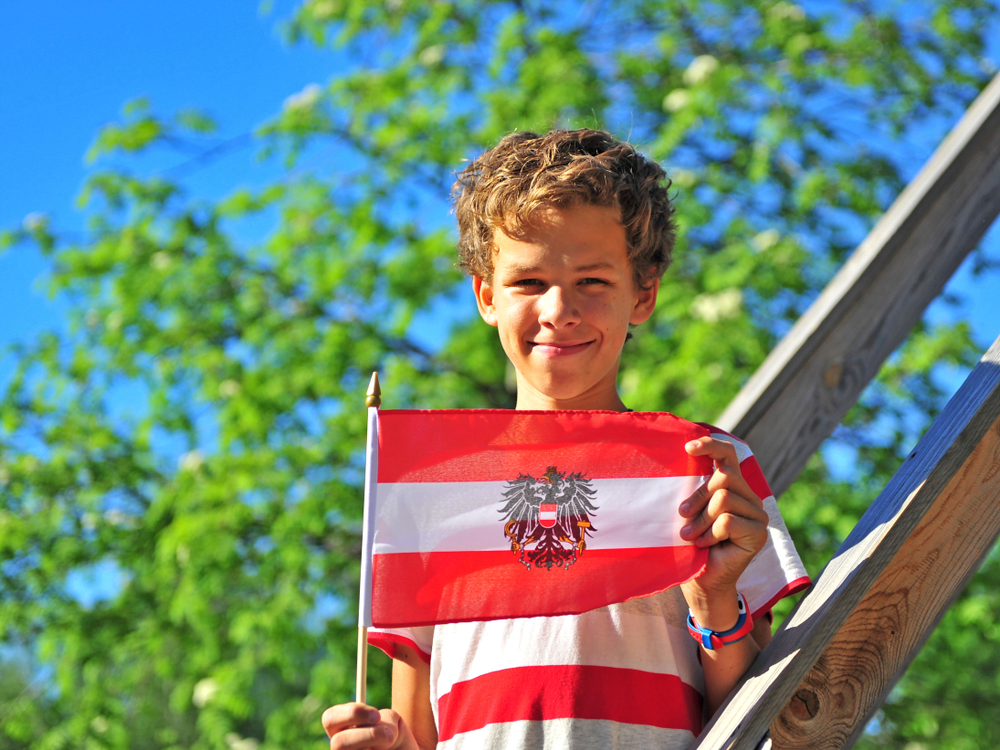 The day begins with special prayers for peace, progress, and stability in the region. The center of independence day celebrations is Vienna, the country’s capital city.

The celebrations start with a flag raising ceremony, followed by a huge military parade including the display of advanced armories and war tanks. Thousands of Austrians including outside tourists as well, head out to the capital city to see the military parades and special performances.

There are special Austria National Day seminars and speeches by government officials, were tribute and respect are paid to ancient leaders who struggled for the country’s independence.

Special Independence Day functions are held throughout the country, where the young generation is taught how the freedom of Austria was gained and how their ancestors struggled to get the separate homeland.

On National Day, all public and private buildings are decorated with Austria National Flags. Many citizens decorate their houses and towns with pennants and lights. Special firework shows are also put together on the independence day. A balloon release ceremonial event is also held in which a number of red-white-colored helium-filled balloons are unleashed into the sky.

To attract the citizens and develop a better understanding of the history of Austria, federal museums offer free or reduced-ticket entries on the National Day. Other important institutions such as the Federal Chancellery, also open their doors to the public.

At many places, the Independence Day celebrations occupy the streets with music and dancing. The lovely cultural dances, concerts, and music performances add glitz and glamour to the event.

For many citizens, the Austrian National Day is one-of-a-kind holiday they look forward to each year. Families and friends plan a picnic to recreational spots where they enjoy, chill and relax. Traditional dishes like Wiener Schnitzel, Charr a la meuniere and Liptauer Cheese Spread, cultural dances and entertainment performances make this holiday an affair to remember.

How the Federal Government Celebrates?

Every year, the Federal Government celebrates the National Day of Austria with a series of events in Vienna, the capital city:

The National Day of Austria is celebrated annually on October 26. A public holiday is observed on this day. Offices, schools, banks, and businesses are closed. Public transport runs on a reduced schedule. 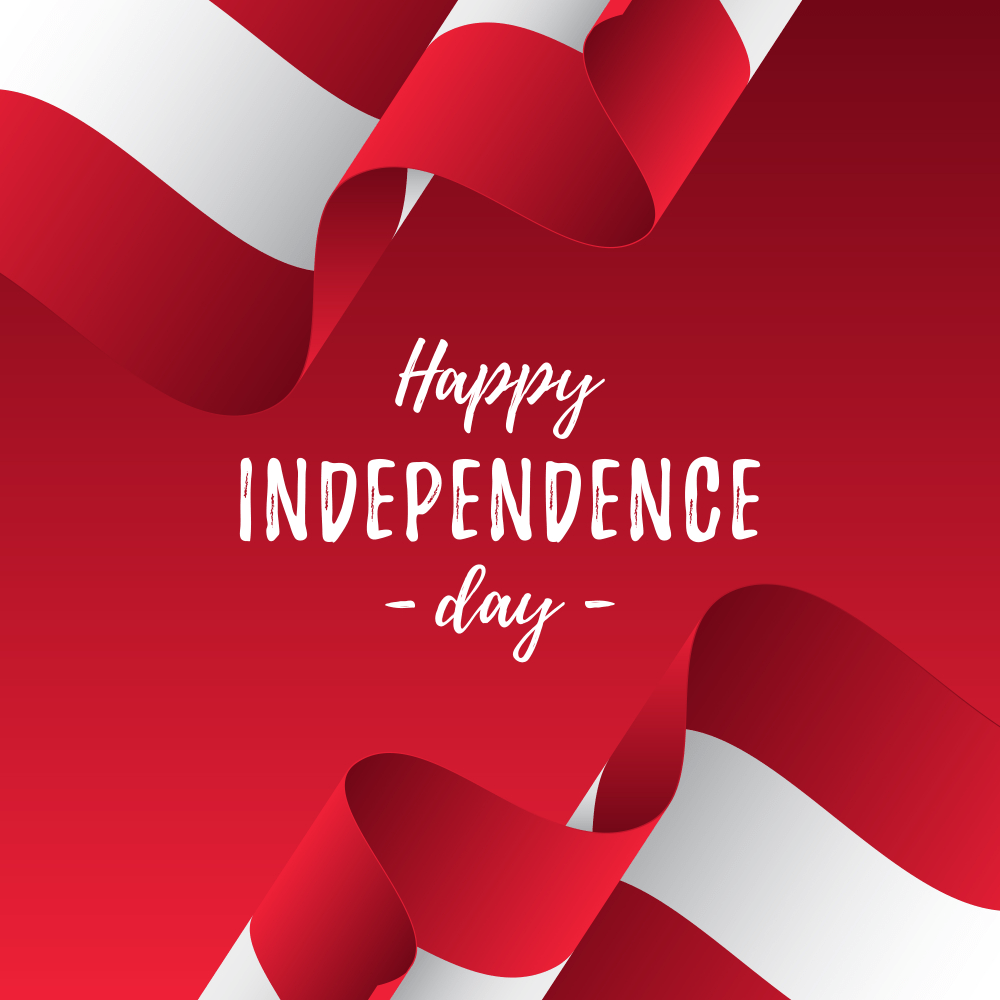 The Republic of Austria is a landlocked region in Central Europe. Let’s read some interesting facts about Austria, its history, geography, culture, people and more… 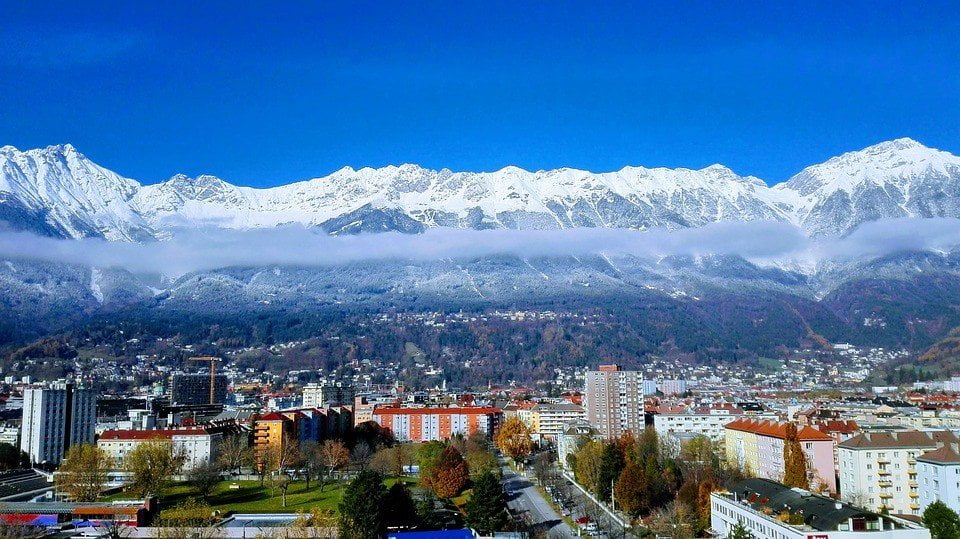 Austria Country – At a Glance:

*Do You Know? Because of the confusion between Austria and Australia, many postal letters and parcels were delivered to Australia rather than Austria. Thus, the Australian post offices had to use a unique rubber stamp that read “redirected to Austria in Europe”.