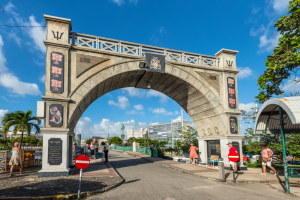 Barbados is a beautiful country located in the eastern Caribbean side and is an independent British Commonwealth nation. Barbados became an independent state on November 30, 1966, and became commonwealth realm with British monarch.

The current population of Barbados is 286,820 as of March 11, 2021, according to the latest United Nations estimates which are about almost 0% of the total world population. According to population, Barbados ranks at 184 in the list and has 32% of their total population urban.

The National Flag of Barbados

The national flag of Barbados is the combination of three equal vertical panels. The center panel is gold colored and the outer panels are of ultramarine. In the middle, there’s a broken trident. The Blue color represents the Barbados sea, and the gold represents the color of sand on the beaches.

In Barbados, 95% of the population is Christian according to the 2000 official census while the remaining is a combination of different non-christian religions.

The dialing code of Barbados is +1. This dialing code is used before the IDD and the area code for each city is used to make calls.

There are several top destination sports to visit in Barbados but the most common and popular spots to visit are Bridgetown, Holetown, Oistins, and Bathsheba.

Barbados occupies 431 sq. Km. the area which is about 167 sq. miles. It has a length of 34 kilometers and has a width of 23 kilometers only.

The GDP in Barbados is 4.7 US Billion Dollars but it’s expected to increase to 4.8 USD Billion by the end of this year according to Trading Economics global macro models and analysts expectations.

The most popular sport in Barbados is Cricket. But some other sports like tennis, football, golf, and basketball are also being played commonly in the country.