The English Language Day is celebrated every 23rd of April each year. This day aims to make people explore all the necessary things to know about the English language including its development, history, culture, and how it became the international language. Learning English is very helpful to everyone, especially to non-native English speakers. We can all have a common language to speak and is a necessary step for us to understand each other. 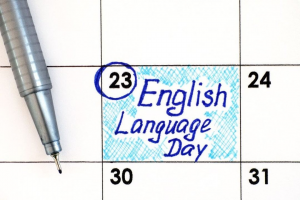 About the English Language Day

Many people all over the world celebrate English Language Day. They either learn more English or teach others in English writing and speaking. People also shout out on social media how they are celebrating this important day.

As mentioned earlier, English Language Day is celebrated every 23rd of April each year.

If you are an English native speaker, then it is all the more reason for you to celebrate this day. This can be a good time for you to appreciate this language of yours that you use to communicate with other people.

The following are the best things to do to make your celebration of English Language Day as best as it can be:

One good idea for your celebration of this day is to become more proficient in English. Maybe you are already a beginner or intermediate in English speaking and writing. But there is a lot more to learn. You can become an even more advanced English speaker and writer by practicing and learning more about the language. This will be a good day to kick off this endeavor.

Or perhaps you still don’t know much about English that you want to start learning it. You may be even reading this content through a translator. It would be beneficial to you if you can learn the language. This is a good day to start doing so.

Or maybe you are knowledgeable enough in English that you can now share your knowledge to other people. You may have friends or family members who want to learn the language and have no means of doing so. You can become their tutor or teacher.