Oh Yes, Burrito Lover’s all-time favorite holiday, the National Burrito Day has just arrived. National food holidays might sound plain. Sure. But where there are free Burritos involved, the Americans and Canadians celebrate each and every moment like it’s their own birthday! 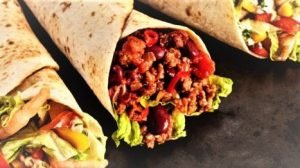 So, let’s just get right to the details of National Burrito Day and get a sneak peek inside this special food holiday. Also shared are the Happy Burrito Day freebies that you must score this year.

When is National Burrito Day?

National Burrito Day is celebrated every year on the first Thursday of April. This year in, the day will fall on April 7.

What is National Burrito Day?

*Do you know? Burritos made in the United States, when compared to Burritos sold worldwide, are big in size and packed with multiple ingredients such as meat or vegetables.

What is National Burrito Day History?

In the 1910s and 1920s, a Mexican street vendor named Juan Mendez sold street food items in the Mexican city of Juarez. It was his daily routine to pack and carry his food items to the street, riding on a donkey a.k.a a burro. At some point, he decided to keep food items hot by tightly wrapping them in a huge flour tortilla, until one day he realized that it was a great way to serve different food items tightly packed in the flour tortilla. From that day onward, it came to be known as Burrito Day.

Since Juan Mendez sold his first Burritos on the first Thursday of April, so the same day was set to be celebrated as National Burrito Day.

Burrito is a Mexican-inspired food, and translates to English as “little donkey”. But the burrito is so named not because it appears like a donkey and nor it was because donkey meat was used in it! It came to be known because a tightly-packed burrito resembles a bedroll that donkey carries.

*Do you know? Burrito came to the United States in the 20th century, after the Mexican immigrants came to settle in America. The food item soon conquered the whole of America, with the launching of Choptle Mexican Grill in 1993.

Today, altogether 400 million burritos are sold every month in Canada and the United States of America!

This year’s National Burrito Day is April 7, and obviously, for foodies, the best way to celebrate this food holiday is to eat a lot of delicious burritos of your favorite stuffings. But where to get free Burritos and discounts this Burrito National Day?

Numerous fast food chains in the US, Canada, Australia, and the UK are offering super hot Burrito deals for you to grab. Here’s a list of best Free Burrito Day deals :