The World Nutella Day is celebrated every 5th of February each year. It is a holiday that celebrates everyone’s favorite spread – Nutella. This spread has become so popular all over the world and a lot of people crave for it. It is manufactured by Ferrero, an Italian candy company. It is now being sold in over 57 countries around the world. According to statistics, a jar of Nutella is being sold every 2.5 seconds. Because of the popularity of this spread and the extreme love by people for it, a special day is dedicated for it. This day gives a lot of fun as celebrating the National Ice Cream Month.

What is the World Nutella Day?

Nutella is a chocolate spread made from cocoa and hazelnut. It was first created in Italy back in 1964. It can be used as spread on toast. It can also be put into pastries and other baked goods. It can even be used as a flavor for ice cream. There are lots of good treats that can be made with this special spread. Hence, a day is dedicated just for celebrating it – the World Nutella Day. It is a day of celebration where people eat the spread by itself or with other foods. 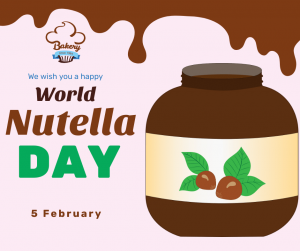 History of the World Nutella Day

The World Nutella Day has a rich history. Its roots can be traced back from when the spread was invented until the day when the world celebration was founded.

When was Nutella first created?

Chocolate supply became so scarce during the 1940s so Pietro Ferrero came up with the idea of mixing hazelnut to his chocolate so that he can increase his chocolate supply. He named such product Pasta Gianduja. In 1951, he made a creamier version of this spread which he called Supercrema. In 1963, the recipe of this spread was altered so that it could be marketed in Europe. In April 1964, the first ever jar of Nutella was sold.

What is the history of the World Nutella Day?

It was Susan Russo, an American blogger, who founded the celebration of this day. Back in the early 2000s, she lived in Italy and loved to take jars of Nutella back to the United States. The reason for this is that during that time, there was not much Nutella sold in the USA. She then wondered why the spread was not popular in the US when in fact it was so delicious. In 2007, she sent an email to her friend Shelley Ruelle, a fellow blogger, asking the latter if she wanted to join her in hosting the World Nutella Day. Of course, Ruelle replied a big yes.

The first World Nutella Day was celebrated on February 6, 2007. However, a year later, the date was changed into February 5. Even up until now, people from all over the world celebrate this amazing day.

When is the World Nutella Day?

This holiday is always celebrated on the 5th of February each year. This means that next year, people will have fun with this event on February 5.

How to Celebrate the World Nutella Day?

There are several activities one could do to make the celebration of this amazing holiday a really wonderful and unforgettable one.

If you haven’t tried Nutella yet, then this is the perfect day for you to do so. You will surely never regret eating this wonderful spread. You will not wonder why a lot of people all over the world are so crazy about this chocolate hazelnut cream.

Make Your Own Nutella Inspired Food

You can also celebrate the day by making a food with Nutella as an ingredient in it. Perhaps the simplest one you can make is a Nutella sandwich. You can also try making a Nutella flavored ice cream or cake.

You can also try to host a Nutella party. You can invite your friends and relatives over to your house so that you may enjoy eating Nutella together while enjoying a chitchat with each other.

Facts About the World Nutella Day

Of course, celebrating this day will not be complete without sharing some interesting facts for the World Nutella Day.