Pi Day is celebrated every March 14 of each year. In the USA the United States House of Representatives supported the designation of Pi Day. The date of celebration is this day because the first three significant digits of pi are 3, 1, and 4 (3.14) so 3 in months is March while the day is 14.

Pi is a number that is used to describe a circle. It is one of the irrational numbers in mathematics. You get a pi when you divide the circumference of the circle with its diameter. 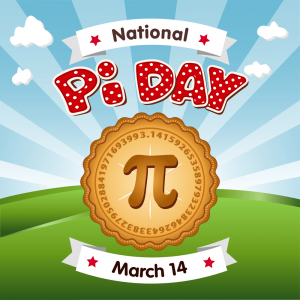 This ratio is always approximately 3.14159265. Technically there are trillions of values of Pi. It’s a number that is infinite and goes on and on and on. Π is the symbol that denotes to pi. Π(pi) is one of the Greek alphabets which translates into ‘p.’ The word Pi and pie both are homophones in the English language. Pie is a sweet or savory dish that can be made by baking.

About the Pi Day

Pi Day is celebrated on March 14th (3/14) around the world. Pi (Greek letter “π”) is the symbol used in mathematics to represent a constant — the ratio of the circumference of a circle to its diameter — which is approximately 3.14159. Pi Day is gives an opportunity for math lovers to recite the infinite digits of Pi, talk to their friends about math, and to eat Pie with a Pi or 3.14 dedication on top.

Mathematical experts have calculated the decimal places of pie for over one trillion digits. Although the truth to this mathematical constant is that it is classified as an infinite number, which means that it has infinite digits. The pi is an irrational and transcendental number, it will continue infinitely without repetition or pattern. While only a handful of digits are needed for typical calculations, Pi’s infinite nature makes it a fun challenge to memorize and to computationally calculate more and more digits.

The earliest known official or large-scale celebration of Pi Day happened in 1988. It was organized by Larry Shaw at the San Francisco Exploratorium. This was where Shaw worked as a physicist. He celebrated with staff where they did a public marching and consumed fruit pies. Even up until this day, the Exploratorium continues to celebrate Pi Day.

The celebration became formal on March 12, 2009, when the US House of Representatives passed H. Resolution 224 recognizing the 14th of March as National Pi Day.

As mentioned earlier, Pi Day is always celebrated on the 14th of March each year.

What is Pi Approximation day?

People who celebrate PI day like to celebrate it by baking different pies. There are two days when Pi is celebrated. One is on March, 14th which is 3.14, the first initials of the ratio. The other day is 22nd July, which is 22/7. 3.14 and 22/7 both are an approximation of pi.

When was the first Pi day?

Larry Shaw is a physicist who is responsible for holding the first pi day in 1988. Larry Shaw and his colleagues celebrated this day by circling his office and eating pies. Since then people all around the world have been celebrating this day on 14th March. It was not until 2009 that it the U.S house representative passed a bill recognizing March, 14th as an International Pi day. And 22nd July is Pi approximation day. People who write their date in the format of month/day celebrate pi approximation day on 14th March. Whereas, people who write the date in the format day/month celebrate it on 22nd July. It does not matter on what day you are celebrating pi day on as long get to celebrate and eat pies.

The following are the main reasons why you should participate in the celebration of the Pi Day:

Pi is Cool Because of Its Infinity

Pi is an irrational number. This means that its exact value is completely unknowable. Furthermore, there is no recognizable pattern to the currently known trillions of decimal digits of the pie. Because of this fact, the pi is a really cool number and thus celebrating this Pi Day will be a very cool happening.

Because pie sounds like pie, most people celebrate the day by baking or purchasing, and then eating pies in various flavors they may like. So if you want to celebrate a day where you get to eat your most favorite pies, then you should participate in the celebration of Pi Day.

Also, a good reason to celebrate this day is to commemorate the fact that Pi is linked to real world. It has been associated with cycles, calculation of waves, flow, ebb, ocean tides, and electromagnetic waves. Various natural phenomena in the world have also been calculated using pi such as the disc of the sun, the shape of rivers, the DNA helix spiral, and the pupil of the eye.

The following are the best things to do to make your celebration of the Pi Day as best as it can be:

One good idea for your celebration of this day is to eat pie. You can make or bake your own pie, which is actually the recommended thing for you to do. You may follow an online recipe or a cookbook if you don’t know how to make one. If you don’t have time for that, you can instead purchase a pie from the bakery or pastry shop.

You can also celebrate this day by throwing a pi party. Here, you can organize a potluck where your friends must bring pizzas, pies, and other circular foods. Don’t forget to play music such as American Pie and I Like Pie.

What is the difference between pi day and pi approximation day?

Mess somehow, find its way when we are talking about mathematics while we are talking about the pi day or a pi approximation day. There a lot of people who fight over what is the right time to celebrate this day? Or whether we should observe this day or not? Different mathematicians have different opinions. Some mathematicians say that 14th March is the Wrong day to celebrate Pi day. The reason they have is that almost everywhere outside America, people write their date in the format date/month. So, 14th March is not 3.14 but 14.3, which is nowhere close to the value of pi. Some people instead agree that 22nd July is almost closely the best day to observe the pi day. And, 22nd July should be International pi day instead of 14th March.

Other mathematicians do not have the above argument at all, observing an orthodox opinion rather. They say that pi is a number and should not be used with this attitude. And hence, not celebrated with pies and made fun of.

Π Is not used in most calculations, according to some beliefs. People should observe Tau day, which is just two times the value of pi. Tau is much easier to use in calculations than pi. Mathematicians say that it makes more sense to them to observe Tau day than to celebrate pi day. They say that celebrating pi day looks like century-old propaganda to them.