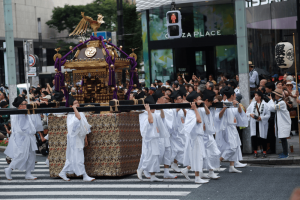 It involves a procession called the Shinkosai which happens during even-numbered years. But each year, various activities are conducted by people in light of the celebration.

What is the Sanno Festival?

The Sanno Festival or the Sanno Matsuri is an annual festival held in Japan to celebrate good fortune. It was originally celebrated to wish good fortune for the building of the Edo Palace back during the Edo period under the rule of the Tokugawa clan. Nowadays, people in Japan celebrate the Sanno Festival by conducting various activities such as parades where they showcase mikoshi or portable shrines.

What is the History of Sanno Festival?

The Sanno festival has a rich history especially since it is one of the grandest celebrations in Japan. Its roots can be traced back to the Edo period when the Tokugawa clan ruled the country.

Tokyo was formerly called the country of Edo. During the time when the Tokugawa shoguns ruled the country from 1603 to 1867, the Sanno shrine became associated with the Tokugawa family. The Sanno festival was started as a celebration to honor the new political center and rulers of the nation.

What is the Origin of the Sanno Festival?

As mentioned above, the Sanno festival is one of the three greatest festivals of the Edo country, which is Tokyo now, along with the Fukugawa festival and Kanda festival. During the Edo period, mikoshi or portable shrines and festival floats were put inside the grounds of the Edo Castle in part of the celebration. Attendees included important people like the Tokugawa Uematsu, the Japanese shoguns or military commanders, and the third Tokugawa shogun. Back during these times, the Sanno Festival was actually called the Tenka festival. It was a grand and spectacular celebration.

How Did the Sanno Festival Evolve?

The Sanno festival was a very grand celebration back in the days. However, nowadays, the celebration became much smaller in scale compared to before in order to avoid interfering with traffic and the regular business schedule and operations. There are some roads being closed but not all. The festival runs along with the busy traffic on the side. For the parades, only modern sized floats are included. They are also attended by about 500 people who dress themselves in colorful costumes, in addition the most important part of the parade is the showcasing of the three portable shrines called the mikoshi. These shrines carry the kami or the Shinto Gods which are paraded across the city.

When is the Sanno Festival?

What is the Sanno Festival’s Main Attraction?

The main attraction of the Sanno festival is the parade that lasts for about nine hours on the streets of Tokyo. This parade begins at the Hie shrine which is the main shrine responsible for the festival. This shrine is the shrine of the guardian deity of Tokyo who is believed to be the founder of the city. The shinto Gods or kami of this shrine are also believed to be the ones protecting the city.

The Start and the Stop at the Imperial Palace

The parade begins at the Hie shrine. Here, people can see a large straw ring in the middle of the shrine grounds. People believe that walking through this ring can purify them and hence they do that as a staple practice for the celebration. The parade continues after that and it finds its way around the Tokyo area where it also passes the Yasukuni shrine and the Yotsuya train station. Before noon, the parade arrives at the Imperial Palace of Tokyo where it stops there for about 30 minutes. During this time, the mikoshis are subjected to religious ceremonies. The chief priest of the parade also enters the imperial palace to offer prayers to the emperor and his family.

Continuation of the Parade

After that, the parade ensues and continues its way past the Tokyo station. It then pauses again for another 30 minutes at the Nihonbashi Hie shrine where the participants of the parade take a rest. However, the shrine is very small so not all people are able to enter it. But the remaining people just head over to the nearby park where they take a rest. They bring the floats with them. Afterward, the parade continues where it passes the Nihonbashi Bridge, then the center of Ginza, through the Shinbashi Station, and then back at the Hie Shrine. Hence, it is a roundtrip parade that starts in the Hie shrine and ends back in the same shrine.

How to Celebrate Sanno Matsuri?

Since the Sanno festival is one of the greatest celebrations in Japan, various activities are conducted by people for the day. The most important ones include the following:

This parade is joined by hundreds of people dressed in traditional costumes, an example of which is the kamishimo or samurai costume. They walk around the area of the festival with portable shrines that carry the guardian deity. Other participants of the parade include: tokeiraku people wearing costumes decorated with spirited fighting roosters and they ring the bells, and shishimai performers who do the lion dance.

This is one of the major highlights of the event. About 12 matsuri yatai floats are paraded for the Sanno Matsuri. In fact, each of these floats is different from each other. Each has its own unique ornaments. It would be fun to take a close look at each of these floats and compare the differences. They are always put together so that people can enjoy the sight of seeing these beautiful floats together.

During the night of the 14th when the festival is celebrated, the Yomatsuri is showcased. This js where floats are slowly paraded across the streets. The floats contain approximately 100 lanterns. People get fascinated by the beautiful sight of this one of a kind spectacle. It brings a unique experience different from that of the daytime festival.

Some Facts about the Sanno Festival