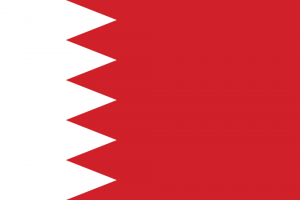 Bahrain is a water surrounded country in the Middle East that comprises more than 30 islands in the Arabian Gulf. Since antiquity, the majority of the trade performed has its routes from Bahrain.

The capital of Bahrain is Manama. This modern city houses Bahrain National Museum which showcases ancient Dilmun civilization artifacts that got a lot of development in the region of millennia. The best thing about this city is the thriving Bab al-Bahrain bazaar where different ranges of colorful handwoven fabrics and pearls exist.

According to the latest United Nations estimate, the current population of Bahrain is 1,615,636 as of March 10, 2021. This one million plus number is just 0.02% of the total world population. According to population, Bahrain ranks at 152 and 79.2% of the population is urban.

The total land area of Bahrain is 760 sq. Kilometers which is equivalent to 293 sq. miles. For

The national flag of Bahrain consists of a white band on the left, separated from a red area on the right by five triangles that serve as a serrated line.

The currency of Bahrain is Bahraini Dinar which is two times expensive than a dollar. The currency symbol is BD.

The majority of Bahrain population is Muslim which is about 66% to 70% of all the population which includes both Shi’a and Sunni. Similarly, there are around 1,000 Christians citizens and around 40 Jewish citizens.

The dialing code of Bahrain is +973 which is dialed after the IDD. This dialing code is used with each area code of the country.

According to Trading Economics global macro models and analysts expectations, the GDP of Bahrain is about to reach 36.00 USB Billion by the end of 2021 and can reach to 20 Billion US dollars in 2021.

Like other countries, Bahrain comes in the list of sports enthusiasts countries. The most popular sport in Bahrain is Football but some other sports which are commonly played in Bahrain are basketball, volleyball, and handball. Similarly, horse racing, mixed martial arts, and rugby union are also getting the attention of people.