The Groundhog Day is held on the 2nd of February each year. This day is all about checking up the Punxsutawney Phil and find if he is able to see his shadow this year. If the Pennsylvanian groundhog is able to see his shadow, then North American should expect about six more weeks of winter. If he doesn’t then, winter is almost over and spring is just right around the corner. This celebration is really an interesting one. Forecasting what the climate is going to be is relied heavily on such activity by the animal.

The Groundhog Day is the time of the year when people gather together at the Gobbler’s Knob in Pennsylvania to witness the groundhog see his shadow. Specific measures based on how many times a groundhog sees his shadow dictates if winter is about to ensue or if spring is about to come.

The first ever reported news about the Groundhog Day celebration was made by the Punxsutawney Spirit newspaper from Punxsutawney, Pennsylvania. According to such newspaper account from 1886, the day was the time of going to the press and seeing if the beast (Groundhog) has seen its shadow. But it was in 1887 when the first official Groundhog Day celebration was observed. Here, a commemoration was done by a group who made a trip to the Gobbler’s Knob (part of the town) to see and consult a groundhog. Ever since this day, people went to the exact same spot to see if the animal has seen its shadow.

Who Started the Groundhog Day Celebration?

There is a man named Clymer Freas who is considered to be the father of the Groundhog Day or the founder of such celebration. Historical accounts saying this also mention that the origin of the celebration is Punxsutawney. The holiday then spread across the different parts of USA.

What was the early celebration of Groundhog Day?

During the humble beginnings of this holiday back in 1880s, the celebration of Groundhog Day was handled by the Punxsutawney Elks Lodge. The members of the lodge were the ones who eventually became the founders of the Groundhog Club. However, the lodge started out as being interesting in hunting groundhogs for food. Hence, one of their staple activities became hunting groundhogs. One popular drink called groundhog punch was even made from groundhogs. The flavor of this drink is said to be a cross between chicken and pork. However, eventually, the hunting activity did not become popular especially for outsiders. Hence, it was discontinued and can only be remembered from history.

Why is the Groundhog called Phil?

You may have heard a lot of people calling the groundhog as Punxsutawney Phil or simply Phil. It is actually an alternative name for the animal. The term was used by people starting in the 1940s.

When is Groundhog Day Celebration?

Facts about the Groundhog Day Celebration

Your celebration of this holiday will become even better if you learn and share some good and interesting facts about the Groundhog Day Celebration. 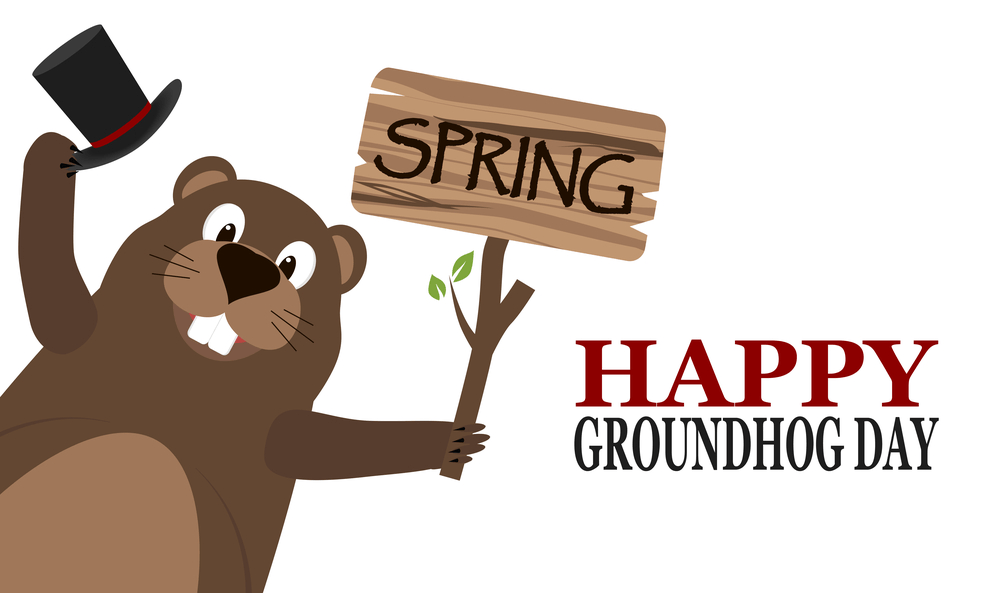 Nowadays, the largest celebration of the Groundhog Day is in Punxsutawney, Pennsylvania which is the place where the holiday originated. Before 1993, the town draws about 2000 people for the celebration. but after the release of the movie called Groundhog Day in 1993, attendance rose to about 10,000 people. People go to the spot where the Phil is summoned to see his shadows. Those who cannot come to the exact spot rely on livestreams by people there. All of them wait for the forecast of the groundhog and see if winter will remain or if spring is about to come. Thus, the groundhog is considered to be an animal meteorologist.

It really is interesting and fascinating to rely on an animal for climate forecasts. Hence, you should participate in the event if you want to see the special skill of the groundhog. Aside from that, it is really fun to join the activities conducted by people for the celebration of this day. you can also get a taste of groundhog meat served in delicious dishes offered to visitors and participants of the event. 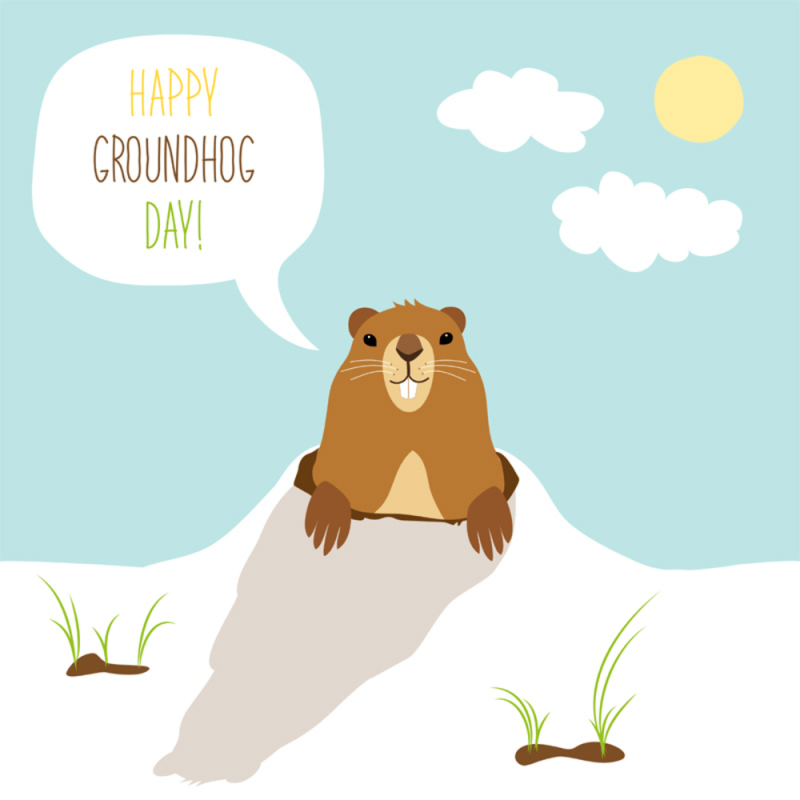 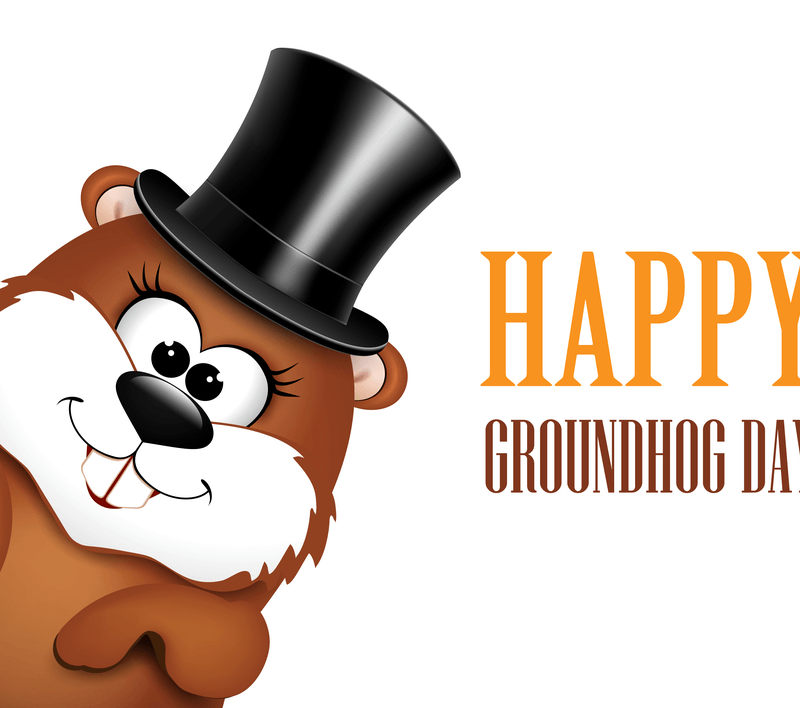 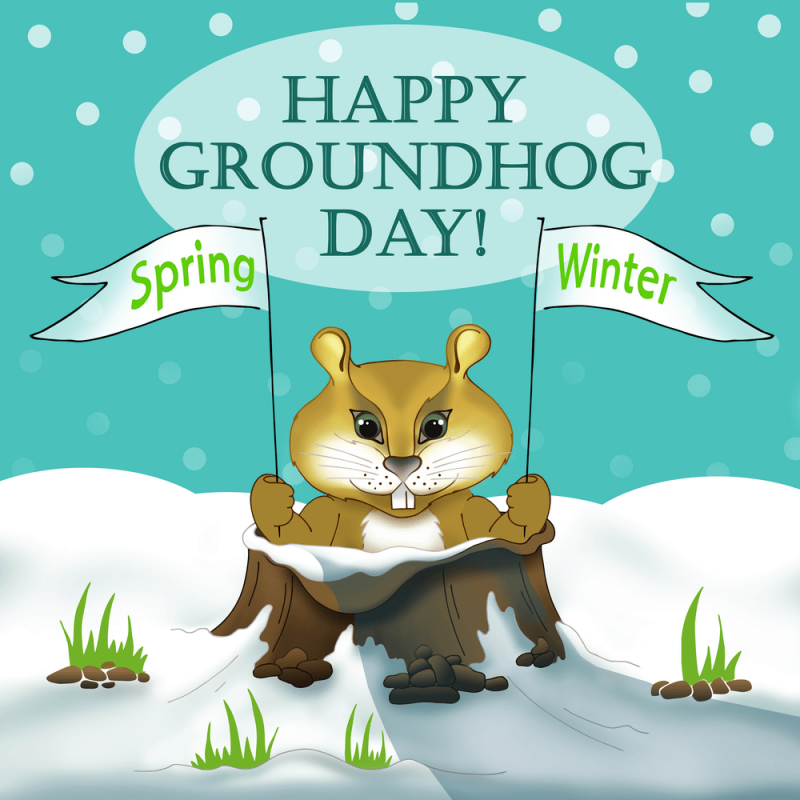 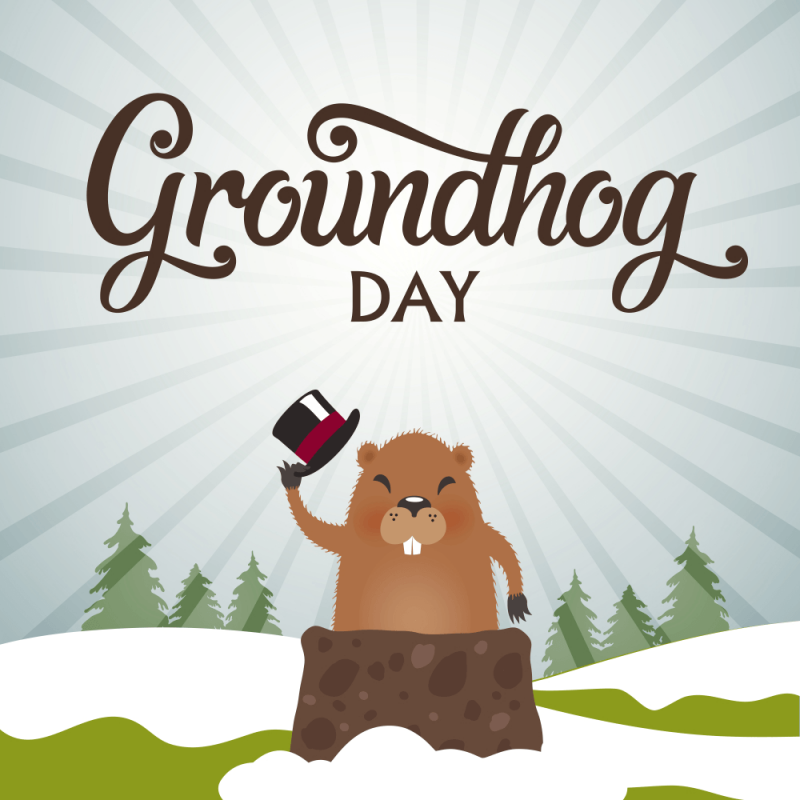 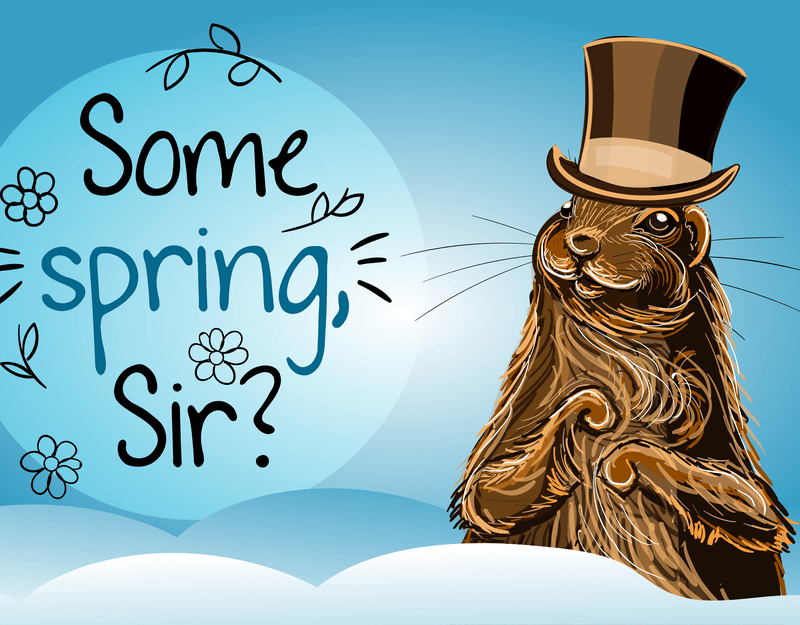 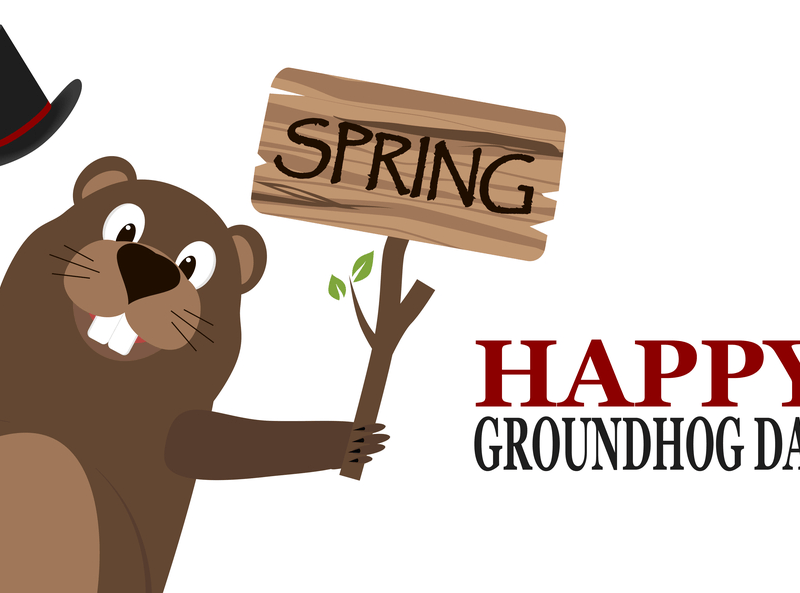 How to Celebrate Groundhog Day?

The following are the most staple activities that a lot of people do to celebrate the Groundhog Day.

Take a Tour to Punxsutawney, Pennsylvania and Celebrate There

The annual Groundhog Day celebration is always held on Punxsutawney, Pennsylvania. This holiday is the perfect time for you to visit this place and join the people gathered at the Gobbler’s Knob too see if the Punxsutawney Phil sees his shadow. If he does, there will be six more weeks of winter. If not, then spring is on its way. If you cannot go to the place for this day, then you can just watch livestreams made by people who are in the gathering.

Another fascinating thing that you can do to celebrate this day is by watching the movie called Groundhog Day released in 1993 and was made by Bill Murray. Watching this movie will surely brighten up your celebration.

Sing Along with the Song of the Groundhog Day

There is actually a song for the groundhog day. You can spice up your celebration of the day by singing the song for this celebration.

You can also make your celebration more socialized by inviting your friends and relative for a groundhog day party. You can serve some good foods like dirt pies, groundhog stew, and more.

You can also take your celebration on social media. For instance, you can use the hashtag #GroundHogDayCelebration to let your friends and followers know that you are also taking part in the celebration of this holiday.

2). February 2 is Groundhog Day. Not to worry–Punxsutawney Phil won’t see his shadow. He’s decided to stay in, watching Bill Murray on repeat all day long.

3). February 2 is coming up, which means that we’ll watch the movie Groundhog Day at my house and Nova Scotia will get six more months of winter.

4). Over breakfast one morning, a wife said to her husband, ‘I bet you don’t have a clue what day this is?’

‘Obviously I do,’ he said, as he pummeled the entryway, and headed to his office.

At 11 o’clock, the doorbell rang. The wife replied, and there at her front entryway was an UPS driver, in his had was a bouquet of 12 red roses.

Afterward, at 2 pm there was another thump at the entryway, this time it was a luxurious box of Belgian chocolates.

In the end the husband got back home, tired following a difficult day’s worth of effort. His wife welcomed him by saying: ‘First the blooms, then the chocolates, I’ve never had such an awesome Groundhog Day in my life!’

5). What do you get when you cross a groundhog with a pistachio? A green beast who predicts a dry spring, and acts like a nut.

6). On Groundhog Day, what does it mean if Punxsutawney Phil comes out and sees the village idiot? Within 6 weeks you’ll have a village full of idiots.

7). What happened when the groundhog met the dogcatcher? He became a pound hog!

8). What do you call Punxsutawney Phil’s laundry? Hogwash.

9). What’s green, has four legs, and jumps out of its hole on Groundhog Day? The ground frog!

10). What is a groundhog’s favorite book? Holes

11). What side of the groundhog has the most hair? On the outside

12). What should you do if you find a groundhog sleeping in your bed? Sleep somewhere else

13). Who leaps tall buildings with a single bound? Superhog

14). What do you call a groundhog’s laundry? Hogwash

15). How do groundhogs smell? With their noses

16). On Groundhog Day what does it mean if the groundhog sees a stupid monster? You’ll have six more weeks of stupidity!

17). What would you get if you crossed February 2 with a puppy? Ground-dog Day! 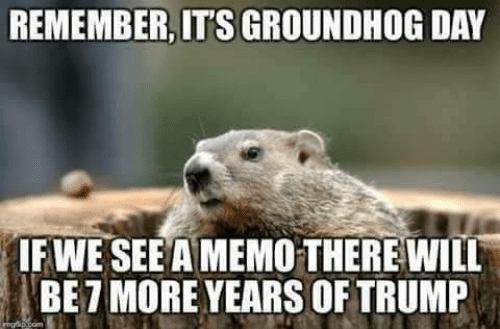 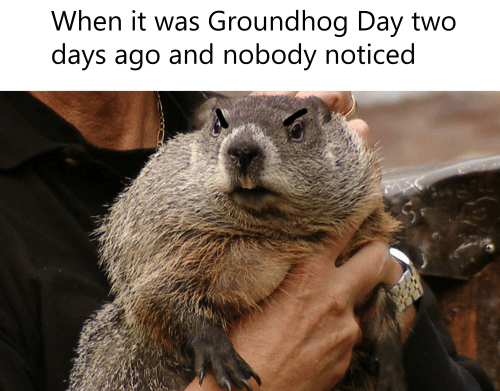 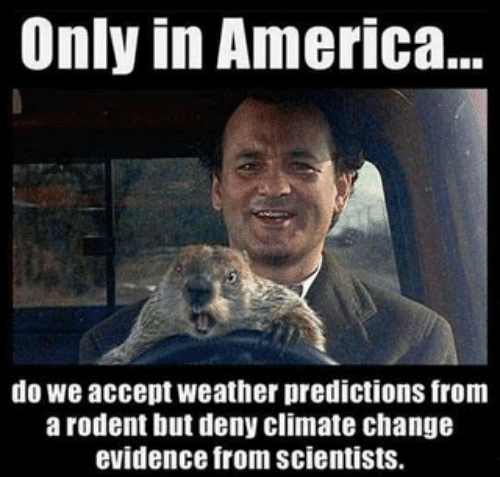 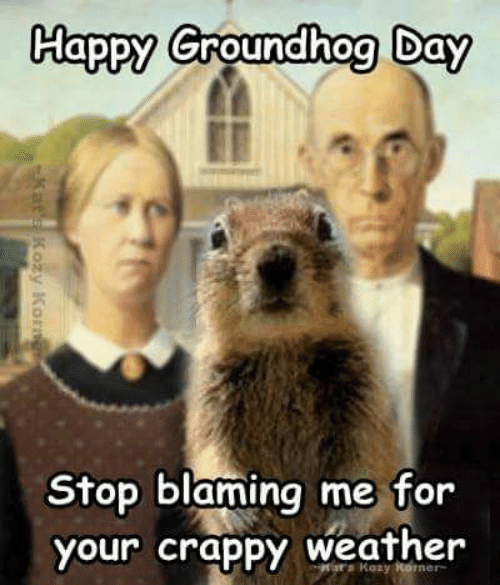 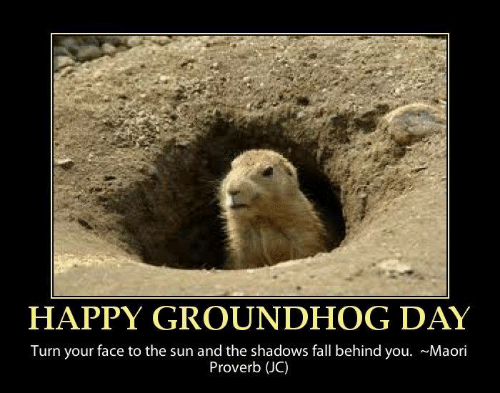 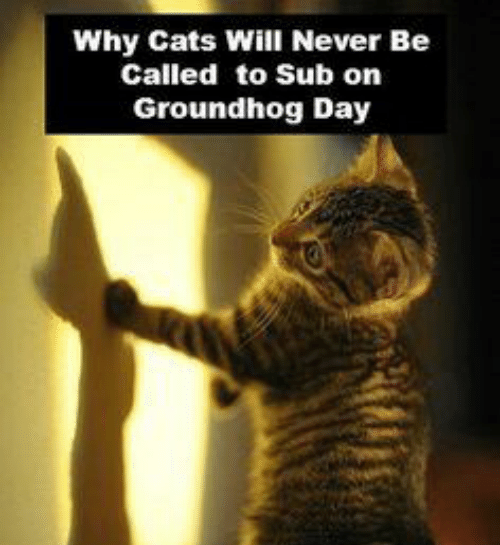