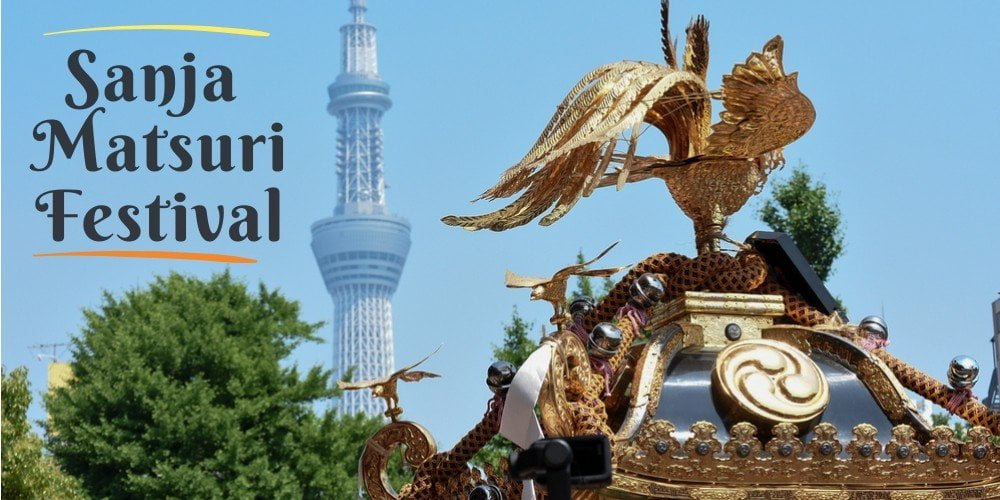 The Sanja festival is one of the three greatest Shinto festivals in the Asakusa district of Tokyo. It is annually held during mid-May. Specifically, it is conducted in the Asakusa shrine and is considered to be one of the largest and wildest festivals in the country. The festival is held to honor the three men – Hajino Nakatomo, Hinokuma Takenari, and Hinokuma Hamanari – who founded the Senso-ji Buddhist temple.

The Sana Festival or Sanja Matsuri is an annual traditional festival in Japan held at Asakusa Tokyo during the weekend of mid-May. The highlight of this event is the procession of the mikoshi or portable shrines during the 2nd and 3rd day of the festival. For the second day, about one hundred mikoshi are gathered across the town. They make their way towards the Asakusa shrine. For the third day, 3 large mikoshi shrines come out of the Asakusa shrine and are paraded across the streets. Along with the mikoshi shrines are participants of the parade who wear traditional, colorful costumes.

The Sanja Matsuri has a rich history starting from when two men discovered a Buddhist statue and then collaborated with another man to propagate a religion. Now, the festival is considered to be one of the grandest ones in Tokyo Japan.

According to historians, the Asakusa shrine was built about 1,400 years ago. The shrines in Japan are usually enshrined with Japanese Gods. But the Asakusa shrine is different since it enshrines real human beings. The first two are Hamanari Hinokuma and Tekanari Hinokuma – brothers who helped construct the Sensoji temple. And the third one is Nakatomo Hajino who is a coworker of the first two. Because of this, the Asakusa shrine is also called Sanja (which means three shrines) and the event held for it on a yearly basis is called the Sanja Matsuri or Sanja Festival.

History of the Three Men Enshrined in Asakusa

During March 628 AD, the Hinokuma brothers were fishing along the Sumida river. Coincidentally, they caught something rather unique in their net. It was not a fish but rather a statue of the Boddhisatva Kannon, also called the Guan Yin. It is an icon of Buddhism and believed to be one of the ascended masters of Eastern spirituality. Nakamoto, on the other hand, was a wealthy landlord who found out about their discovery. He approached the brothers and offered them conversion into Buddhism to which the two agreed on. The three of them then went on to declare the statue as sacred and a symbol of their religion.

How Did the Sanja Festival Evolve?

Followers started to honor the trio for their actions. The Sanja Festival was started to be held each year in honor of this trio. The Festival has gone through lots of changes over the years but the celebration indeed became more solid during the Edo period wherein Japan experienced more peace and prosperity after the violent periods of feudalism. By the time of Tokugawa Iemitsu’s rule, he commanded the building of the Asakusa shrine to honor the spirits of the trio.

When is the Sanja Festival?

The Sanja Festival is always held on the middle of May on a weekend each year. The most recent celebration of the Sanja Matsuri was in May 17, 2020. Next year, people will be celebrating this festival on Friday, May 15, 2020.

Where is the Sanja Festival Held?

The location of the Sanja Festival is at the Asakusa Shrine located in Asakusa District Tokyo Japan. Surrounding areas also celebrate the event. The Asakusa shrine is actually located just next to the Sensoji temple. The Asakisa station of the Tokyo Metro Ginza Line is the closest station. Another close one is the Toei Subway Asakusa Line. Festivalgoers are advised to go early in order to avoid huge crowds who will be participating in the festival.

How to Celebrate the Sanja Matsuri?

The highlights of the Sanja festival are the introductory grand parade during the first day and the Mikoshi Shrine Town Association Parade or chonai mikoshi rengou tohto during the second day.

The first day celebration consists of the grand parade. Here, people wearing historical outfits participate in a procession in the daigyoretsu town. During this time, the Asakusa district is filled with various activities including geisha performances, dances composed of people wearing Binzasara dancewear, and the ohayashi yatai.

The procession begins at the Tokyo Asakusa association (composed of ryotei and geisha restaurants) which is near the Sensoji Temple. The parade then makes its way through the Kaminarimon gates, the shopping street of Nakamise-dori, the Rokku entertainment district, and then the Asakusa shrine. At the Asakusa shrine grounds, the Binzasara dance, which has been passed across generations, is performed.

The highlight of the second day celebration is the parade of one hundred mikoshi or portable shrines across 44 towns. In this parade, participants shout “oisa oisa” and “wasshoi wasshoi” was they carry the mikoshi. In japan, they call this parade the Chonai Mikoshi Rengou Togyo. Also in this parade, the participants perform the tamafuri where they move the shrines up, down, left, and right. This movement is believed to bring in good harvest, good catch of fishes from the sea, and ward off illnesses.

The third day is when the main event of the festival is held. The three main, large mikoshi shrines are paraded from the Asakusa shrines to the nearby towns. This parade is specifically called the Honsha Mikoshi Kakuchou Togyo. Throughout the parade, the three shrines actually go in three separate ways after which they converge again and meet at the Asakusa shrine. Also during this day, there is a path called the omatsuri hiroba which is the way from the Kaminarimon gates to the Umamichi-dori street. In addition, the mikoshi shrines used during the second day are displayed here.

Facts About the Sanja Festival

The most interesting facts about the Sanja Matsuri are the following: